An unexpected surge in global atmospheric methane is threatening to erase the  anticipated gains of the Paris Climate Agreement.  This past April NOAA posted preliminary data documenting an historic leap in the global level of atmospheric methane in 2018,[1] underscoring a recent wave of science and data reporting that previously stable global methane levels have unexpectedly surged in recent years.

The academic community has responded to the surge by calling for a reduction in methane emissions from the natural gas system, framing it as the most practical response to the surge.[2]

Last year global methane reached a new historic high, marking the second highest year-over-year jump recorded over the last 20 years.  More importantly, the jump in 2018 extended an unanticipated multi-year resurgence of growth in global methane levels that has generated enormous concern in the science community. Scientists report that the new and unexpected methane math threatens to eliminate the anticipated gains of the Paris Climate Agreement, an agreement built upon models that assumed stable methane.[3] 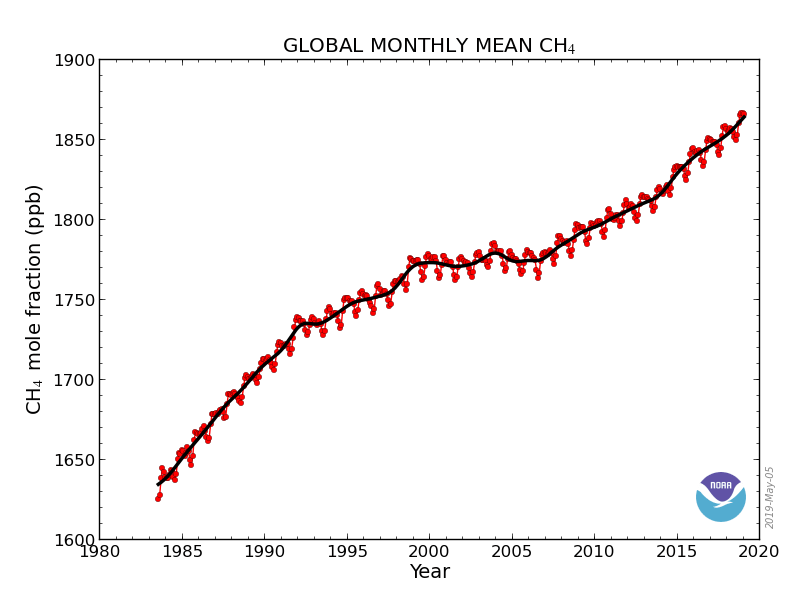 The “why” behind this resurgence is hotly debated and not well understood.   That said, most experts in the field suspect that all traditional sources (natural and anthropogenic) are contributing at least in small part to the surge, and that the biggest contributor might be wetlands responding to climate change (though there is some dissent on this point).[4]

Thus, there is wide agreement among experts that, regardless of the drivers behind the surge, reducing emissions from fossil-fuel production and distribution, primarily through ending leaks and venting, is one of the few options available to control global methane levels and that this option is the most practical one. In addition, scientists report that there are narrow opportunities to address agricultural emissions, e.g. changes in the diet of livestock can reduce the production of methane without affecting production.

Methane is a short-lived but super-potent greenhouse gas and is the second most important contributor to anthropogenic global warming after CO2, accounting for one-quarter of the anthropogenic radiative imbalance (the human forcing of warming) since the pre-industrial era.[9]  Prior to the industrial era global methane levels were low and relatively stable for the last 800,000 years, ranging from 300–800 ppb.  With the advent of agriculture and then fossil fuel operations, methane levels skyrocketed to more than 1,800 ppb.

Nevertheless, global methane levels resumed rapid growth starting in 2007.  Growth accelerated further starting in 2014 and extending through 2017.[12] This exceptional growth appears to have continued in 2018.[13]  The sustained growth of the last five years was last observed in the 1980s when the Soviet Union’s gas industry was developing very rapidly.[14]

At first the durability of this emerging trend was questioned and years of rapid growth were seen as anomalies.[15]  However, the period of resumed growth in global methane levels now stands at 12 years (2007-2018) compared to the 7-year period of stable methane levels (2000-2006).  And preliminary data from 2018 indicates that the trend of extraordinarily high growth now stands at 5 years.

In this light the era of stable global methane levels is increasingly seen as the anomaly, and growth in global methane seen as the resumption of a long-standing pattern.[16]  This emerging consensus was highlighted in two recent high-profile papers published in 2019 representing the consensus views of a large array of experts in the field.[17]

The threat posed by this resumption in methane growth is significant.  A group of 23 scientists recently reported “Thus even if anthropogenic CO2 emissions are successfully constrained to a RCP2.6-like pathway, the unexpected and sustained current rise in methane may so greatly overwhelm all progress from the other reduction efforts that the Paris Agreement will fail.”[18]

While the resumption of growth in global methane is now well documented, the drivers are less well understood and hotly debated.  Present global environmental monitoring networks only provide sparse information about methane concentrations, making it challenging and complex to distinguish between the myriad individual sources of methane from the fossil fuel industries, and dispersed sources like wetlands and agriculture. Gaps in monitoring also make it impossible to rule out a decrease in the efficacy of natural mechanisms that sweep methane from the atmosphere (aka “sinks”).

Potential drivers in the category of increased emissions include emissions from intensive agricultural practices, emissions from oil and gas operations, and increased emissions from wetlands responding to global warming.  [This last potential driver is particularly worrisome as it implies the engagement of a global warming feedback loop.]   A significant number studies have assigned and evaluated the role of each of these drivers, with different studies assigning greater weight to different drivers; all are generally considered to play at least a minor role.[19]

Fossil-fuel methane emissions are also the most easily addressed source of emissions. The International Energy Agency estimates industry can reduce its worldwide emissions by 75 percent—and that up to two-thirds of those reductions (40-50% of total emissions) can be realized at zero net cost.[21]

In addition, there are particular opportunities to address emissions from agriculture.[22] Turner et al., 2019,  note that changes in the diet of livestock could reduce the production of methane in dairy cattle without reducing milk production.

In this context the 23 authors of Nisbet et al wrote:  “We may not be able to influence the factors driving the new rise in methane, especially if it is a climate change feedback, but by monitoring, quantifying and reducing the very large anthropogenic inputs, especially from the gas, coal and cattle industries, and perhaps by direct removal, we may be able to cut the total methane burden to be compliant with the Paris goals.”

Lyon and Schwietzke (2019) Does new NOAA study really show that methane emissions have been overestimated? No. Energy Exchange. EDF. May 2019