Texas is Freezing; Arctic is Melting?

Texas is in the midst of a true and devastating weather disaster. There are daily reports of massive power outages, deadly cold temperatures, statewide snowfall, and residents being forced to boil water.

What is obvious is that the immediate trigger was record-breaking cold temperatures.  Residents in Texas and Oklahoma are rightly scared, but wondering if it’s just a freak event or an ominous sign of things to come.

In both states, certain political leaders delight in pointing out the presence of intense cold in an era of “global warming.”  They use this argument to dismiss the case for the climate crisis, and even the need to transition quickly away from fossil fuels. In fact they are simply ignoring the problem, aka climate deniers.

It’s a good moment to explain the connection between a warming world and the increasing episodes of unusual and extreme cold weather. To some it seems a paradox, but in fact they are intimately connected.

This map from the Climate Change Institute gives the correct insight. It shows Tuesday’s global temperatures as variations from normal. The baseline for the comparison is the same day for the two-decade period 1979 – 2000, prior to the accelerating climate change this century. 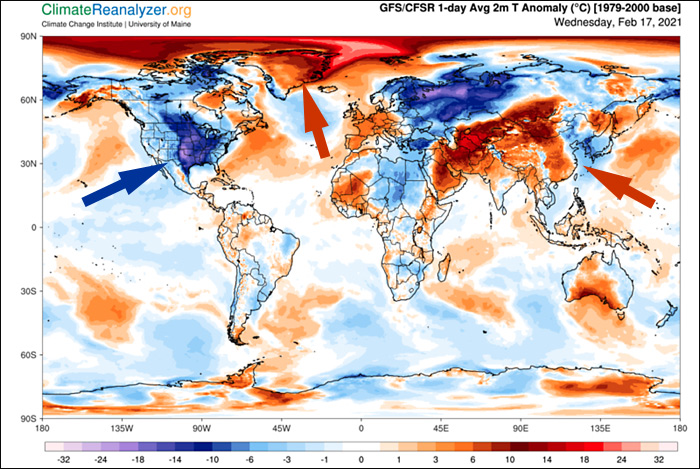 Texas and Oklahoma are shades of dark blue and purple, indicating about 15 – 20 degrees Celsius colder than “normal” or  27 – 36 degrees Fahrenheit colder.

The overall global average temperature has not changed much in the two decades. But look at the distribution or location of the changes from what we came to accept as normal. From the Arctic to Antarctica, from Alaska to Eastern Canada, Europe, West Africa and most of Asia, the varying shades of red show temperatures 15- 20 degrees Celsius warmer than usual, again about 27 – 36 degrees Fahrenheit warmer.

In my first book, High Tide On Main Street, noted British scientist Sir Crispin Tickell was one of the first to describe climate change as climate destabilization. I think it’s a great characterization of what’s happening on our planet.

As the world warms, the greatest effect is to destabilize the patterns that we consider “normal.” This is critical because it is normal weather patterns enable farmers to plant and harvest crops with proper temperature and rainfall.

The “normal pattern”, however, lulled Texas energy planners to only design for warm/hot temperatures and very, very moderate winters.When freezing temps, ice, and snow arrived in force, the grid folded without even a fight. (again, as it did back in 2011)

But science makes clear that these disruptions to the normal weather pattern will continue, become more frequent, and likely continue to get worse.

The really simple explanation is that climate is changing profoundly.

Where do we go? First we have to address that our climate has already changed, and the change is accelerating. Texas is strong evidence.

We must do three things:

As the land ice on Greenland and Antarctica continues to melt at record rates, and will not be stopped for centuries, the sea will rise. This presents a special challenge to coastal cities worldwide, and is the main topic of my new book: Moving to Higher Ground: Rising Sea Level and the Path Forward.  All formats go on sale on April 6, 2021.

The Real Mission of that New Sea-Level Satellite
November 23, 2020

Can a President Stop Flooding by Executive Order?
November 9, 2020

The Lesson from Dauphin Island about Rising Seas
December 2, 2018