Researchers hand Michigan officials a tool to remedy environmental injustice. Will they use it? 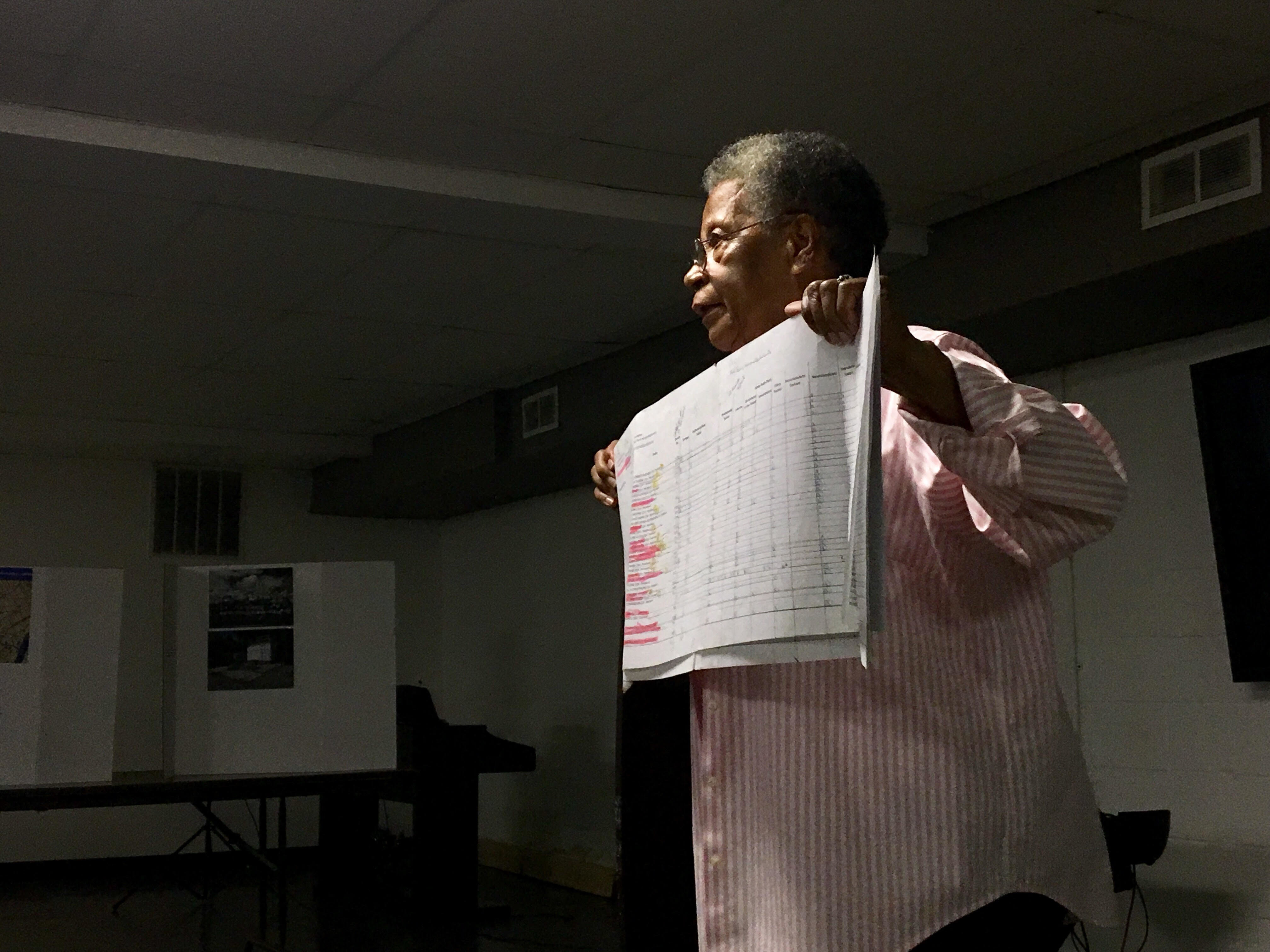 For decades, community members living alongside heavy industry in Southwest Detroit’s infamous 48217 zip code have pressed state environmental regulators to consider the cumulative burden of their exposure to a toxic stew of air pollutants.

But the regulatory system, which takes a chemical-by-chemical approach, has fallen woefully short, leaving residents exposed to harmful pollutants such as sulfur dioxide, benzene and chromium from an oil refinery, aging steel plants, and other facilities.

The community is not alone, as the ongoing water crisis in Flint shows all too well.

Now the state has an opportunity to rectify the environmental injustices borne by Michigan residents who live in heavily polluted areas. A new report, released today by the University of Michigan, evaluates—for the first time—compound environmental exposures and social factors, by census tract statewide.

It identifies “environmental injustice hotspots,” and in so doing sets the stage for policy action, such as the allocation of funds for remediation, or the adjustment of regulatory approaches in at risk communities—tactics that states like California and Minnesota have taken to remedy injustice. 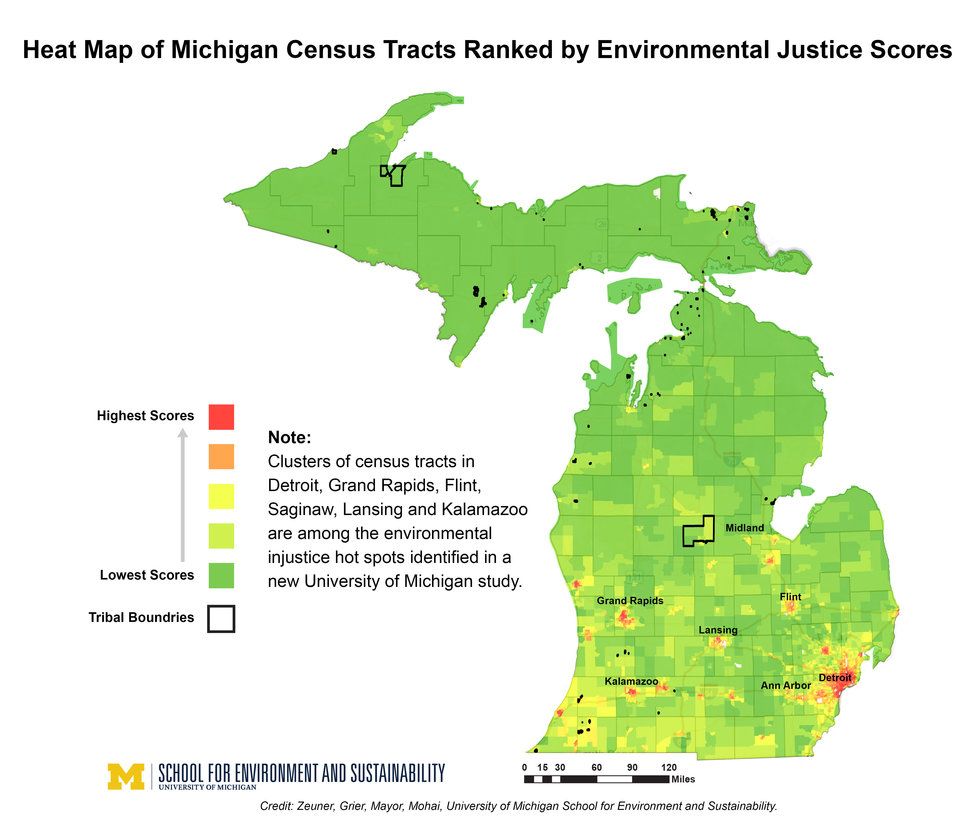 “The study found a considerable amount of inequality in the state,” Paul Mohai, a professor of natural resources and environment at the University of Michigan School, told EHN. Mohai was lead advisor on the study, which was conducted by three graduate students, Laura Grier, Delia Mayor and Brett Zeuner.

The students scored census tracts on 11 environmental and six social indicators, identifying 28 in Detroit, Grand Rapids, and Kalamazoo that ranked in the top one percent statewide for both high risk of environmental pollution and social vulnerability (e.g., high concentration of minorities, high levels of poverty and unemployment, and low educational attainment). Census tracts in Flint, Saginaw and Lansing scored in the top five percent.

“That is the textbook definition of environmental racism,” Melissa Martinez, coordinator for the Michigan Environmental Justice Coalition, told EHN. Martinez approached Mohai with the study idea in 2017 in response to community concerns.

To conduct the research, the students combined methods used by existing environmental justice screening tools, including the U.S. EPA’s EJScreen, CalEnviroScreen from California, and programs created by the Minnesota Pollution Control Agency. They relied on national data sources because state data were unavailable. CalEnviroScreen staff reviewed the students’ methods and data. 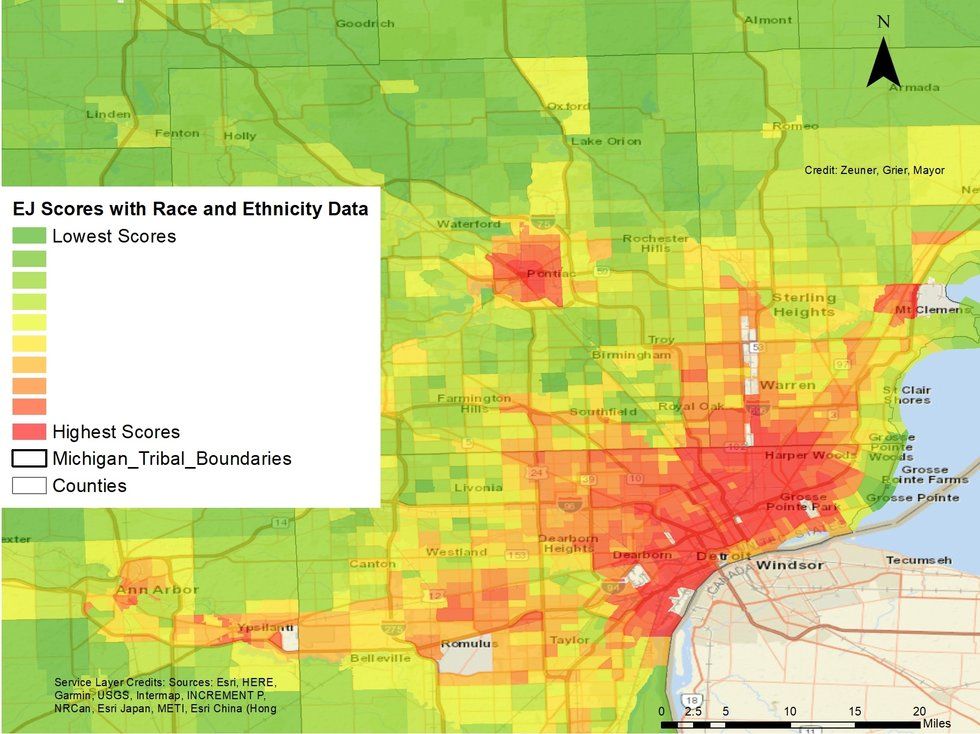 Heat map of Detroit from the new report.

Students also interviewed 30 environmental justice leaders for their analysis, and Martinez said those interviews showed the “psychological toll” on communities struggling to make the case that they deserve the basic dignity of clean water, air and land. “There’s a real unseen cost,” she said.

Mohai, Martinez and others hope that the study will serve as a baseline for measuring progress on environmental justice in the future, and that its findings will prompt the state to take action. They’re already briefed senior officials at the state’s Department of Environment, Great Lakes, and Energy (EGLE) on its findings.

“Other states are trying to identify [at risk] areas and give them some priority to make progress on achieving environmental justice,” Mohai said. “This is the time for Michigan to do the same.”

Strong told EHN she’s “excited” about the report, and that it’s “right in line with what we were already beginning to do.” Specifically, she said, the Interagency Environmental Justice Response team, established by Whittmer, is looking at how to identify environmental justice hotspots around the state and respond to challenges as they arise

“The report helps us get there. It’s really going to add to our work in figuring out how to get it done. We’re looking at how can Michigan become a leader in environmental justice.” 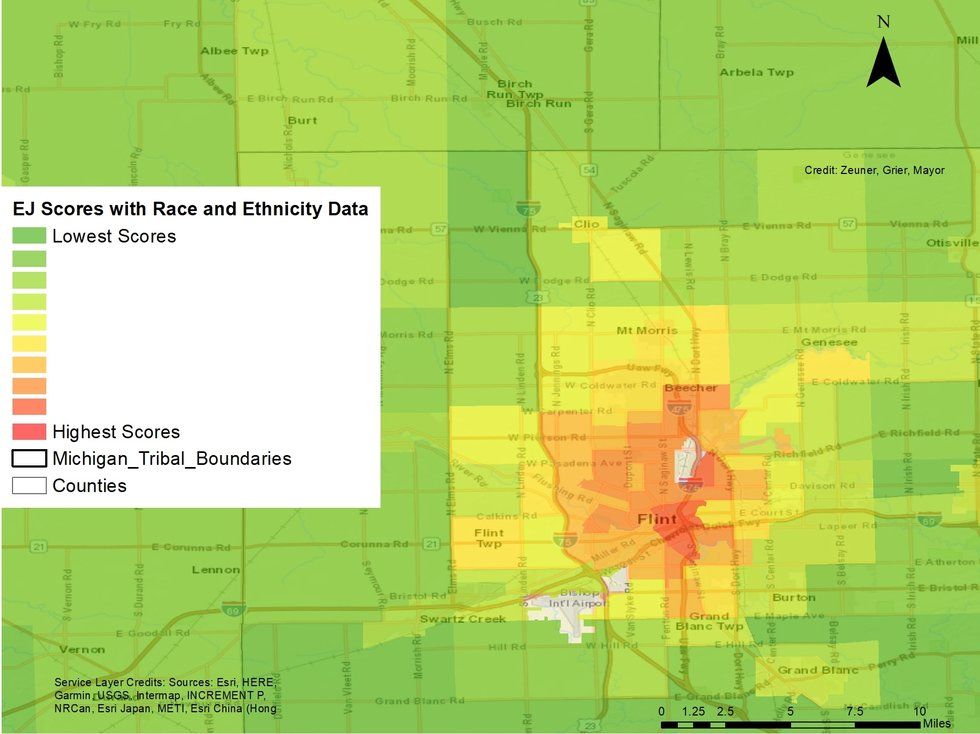 Heat map of Flint from the new report.

Martinez, however, cautions that it won’t be easy because the legislature, in the lame duck session, passed a bill requiring legislative approval for new rules exceeding federal standards.

It’s been “a real detriment to us advancing solutions that we need,” she said.

Nick Leonard, executive director of the Great Lakes Environmental Law Center, agrees, noting environmental justice is an “extra-legal” concern in Michigan, and that regulators “are still bound to the technocratic process that excludes [environmental justice] factors from the decision-making process.”

Still, he said, “We’ll have a better case to go the current administration and to EGLE to say, look we have a serious problem and you don’t address this.”

All agree that progress will advance if the governor makes it a priority.

Meanwhile, in 48217, long-time community activist Theresa Landrum is hopeful that the study will at long last, move the needle.

“It’s going to give the Whittmer administration an opportunity to step up. If she’s sincere,” emphasized Landrum, “this is her opportunity to adapt an EJ Enviroscreen for Michigan.”