Carbon emissions increase significantly with every additional person on earth — the rich more than the poor — and increases the number of climate change victims – the poor more than the rich.

There is clearly a direct correlation between population and climate change.

In the fight against climate change, Project Drawdown ranks family planning as solution number 7. More than 10,000 scientists concur, signing, in 2019, the Scientists’ Warning of a Climate Emergency, in which they explicitly call for, among other things, “bold and drastic transformations” regarding economic and population policies, including making family planning services available to all.

Speaking for more than 150 organizations, Dr. Jane Goodall, added her voice to the call for family planning, as she advocated for smaller families in the summer of 2019.

By Sabrina Tavernise Photo: Stephen Speranza
Luz Portillo, the oldest daughter of Mexican immigrants, has many plans. She is studying to be a skin care expert. She has also applied to nursing school. She works full time, too — as a…

Op-Ed: The complex link between population decline and a warming planet

An unexpected side effect of climate change? More stillbirths

By Matthew Rozsa Photo: Salon/Getty Images
Update: This story has been updated to include responses from the research team behind the paper. Climate change is perhaps the greatest existential threat that humanity has ever faced — and as environmental research accumulates, we keep…

Should We Worry About Population Decline?

By Robert Kunzig Photo: Yang Bo, Vcg/getty Images
Which are you more worried about, population growth or population decline? Or do you prefer to freak out about both at the same time? The recent Census Bureau report that the U.S. population grew in…

By Damien Cave, Emma Bubola and Choe Sang-Hun Photo: Gilles Sabrié
All over the world, countries are confronting population stagnation and a fertility bust, a dizzying reversal unmatched in recorded history that will make first-birthday parties a rarer sight than funerals, and empty homes a common…

By Peter R. Orszag Photo: STR/AFP via Getty Images
The world has yet to apprehend the tectonic shift that will occur as China’s population starts to decline. That long-anticipated event did not occur in 2020, according to official data, but it will probably occur soon. From…

Are there too many people? All bets are off

By Laura Spinney Photo: Abstract Aerial Art/Getty Images
In 2011, when the global population hit 7 billion, economist David Lam and demographer Stan Becker made a bet. Lam predicted food would get cheaper over the next decade, despite continuing population growth. Becker predicted…

Humanity needs to halt both population growth and climate change

By Michael P. Cameron Photo: Shutterstock/Liudmyla Guniavaia
Population growth plays a role in environmental damage and climate change. But addressing climate change through either reducing or reversing growth in population raises difficult moral questions that most people would prefer to avoid having to answer.

By Rebecca Beitsch Photo by Getty Images
Roughly a quarter of childless adults say climate change is a factor in their decision not to have children, according to a Monday poll from Morning Consult.

A Planet of 3 Billion

06/07/21
Tucker makes the case that the Earth’s 'carrying capacity' is limited to 3 billion humans, and that humanity’s century long binge has incurred an unsustainable ecological debt that must be paid down promptly, or else…

Why Population Matters to Climate Change

09/16/19
Our vision is of a future with a good quality of life for all, a healthy and biodiverse environment, and a stable and sustainable population size.

12/24/19
Bernie Sanders was asked about human overpopulation. How did he handle it? And how was that reported by the media and received by the public? The Overpopulation Podcast team offers observations and analysis.

By Kenya Evelyn  Photo: Leigh Ann Henion   12/22/19
Extreme weather is driving islanders from their homes — but starting a new life could be as hard as sticking it out.

‘Every Child Born Today Will Be Profoundly Affected by Climate Change’

11/14/19
By Irene Banos Ruiz Pediatricians in New Delhi, India, say children's lungs are no longer pink, but black. Our warming planet is already impacting the health of the world's children and will shape the future… 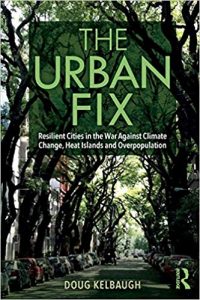 The Urban Fix: Resilient Cities in the War Against Climate Change, Heat Islands and Overpopulation (2019)⭐

Douglas Kelbaugh   11/13/19
Cities are one of the most significant contributors to global climate change. The rapid speed at which urban centers use large amounts of resources adds to the global crisis and can lead to extreme local…

Educating Girls Would Save 59.6 Gigatons of Carbon by 2050

Photo: akshayapatra/pixabay   11/10/19
Educating girls leads to economic growth, and also to lower population rates, since educated women will not only have healthier babies, but fewer of them.

By Michael Shank   10/29/19
What's less frequently discussed when it comes to personal contributions people can make, is also one of the most effective actions on the climate front: a smaller family size.

Is population control the answer to fixing climate change?

10/29/19
The argument some people present is that if there were fewer people on Earth, greenhouse gases would be reduced and climate change could be averted. But experts say population control isn't the panacea some might…

10/16/19
From space shortages to worsening climate change, cities are being forced to adapt at a pace never experienced before. How far can they push their limits, and make sure they leave no one behind?

For many reporters covering climate, population remains the elephant in the room

09/18/19
Why aren't more journalists talking about human population in proportion to the climate impact that it can have?

Elon Musk and Jack Ma agree: The biggest problem the world will face is population collapse

09/04/19
Tesla CEO Elon Musk and Alibaba founder Jack Ma agree that the biggest problem the world will face in 20 years is population collapse.

08/27/19
World Water Week kicked off this week in the shadow of a frightening reality that nearly one-fourth of the world's population is living under extreme water stress and in just five years, half the world's…

We’ve worried about overpopulation for centuries. And we’ve always been wrong.

08/14/19
Blaming the climate crisis on overpopulation means blaming the most marginalized for a problem caused by the rich.

The need for nuance in the population debate | Letters

08/09/19
It would be naive to think social and economic decisions do not bear on the timing and numbers of births that couples choose, says Allan G Hill. Plus Roger Plenty points out that having one…

07/31/19
In ecological terms the royal family is a herd of elephants trashing the forest. Harry’s plans to have only two children is good newsOh Harry, it’s all a bit complicated isn’t it? From extracts released…

07/23/19
Some experts say linking contraception to conservation is ill-founded, especially in Africa.

07/10/19
World Population Day, July 11, is just around the corner. It was established in 1989 by the Governing Council of the United Nations Development Program to turn our focus to population issues.

BirthStrike: The people refusing to have kids, because of ‘the ecological crisis’

By Stephanie Bailey   06/26/19
A movement of women have decided not to procreate in response to the coming ‘climate breakdown and civilisation collapse’. Will their protest be a catalyst for change?...

By Patrick Barkham  Photo by Mahesh Kumar A. / AP file   06/17/19
The growth will increase humanity’s footprint on the planet, which could exacerbate hunger, poverty and climate change, experts say.

BirthStrikers: Meet the women who refuse to have children until climate change ends

03/13/19
A movement of women have decided not to procreate in response to the coming ‘climate breakdown and civilisation collapse’. Will their protest be a catalyst for change?

02/28/19
As it scours the universe for signs of extraterrestrial life, nasa has a motto-cum-mission-statement: “Follow the water”. About 70% of the human body is made up of water, it says, and 70% of Earth’s surface…

By Yasmin Tayag   08/31/18
The greatest driver of climate change is greenhouse gas emissions, which the Science Forum authors, which include renowned demographer John Bongaarts, Ph.D., of the Population Center and Brian C. O’Neil, Ph.D., of the National Center…
Wired

To Stop Climate Change, Educate Girls and Give them Birth Control

By Robin George Andrews   02/18/18
Opinion: When women aren’t educated or empowered to make their own family planning decisions, the effects can lead to higher carbon emissions.

By Damian Carrington   07/12/17
The greatest impact individuals can have in fighting climate change is to have one fewer child, according to a new study that identifies the most effective ways people can cut their carbon emissions.