N.J. Is Warming at An Alarming Rate and It’s Making Our Air Harder to Breathe

Danielle Jenkins has spent her whole life struggling to breathe.

The 17-year-old high school senior grew up with asthma and requires daily medication to keep her respiratory system functioning normally. If Jenkins strays from her routine she knows the consequences: shallow breaths, rescue inhaler puffs and — in extreme cases — hospital trips.

She is one of more than 700,000 New Jerseyans who suffer from asthma. Another 300,000 more live with chronic obstructive pulmonary disease (COPD).

That’s one million people whose airpaths may become even more constricted as climate change heats the Garden State at a staggering pace. 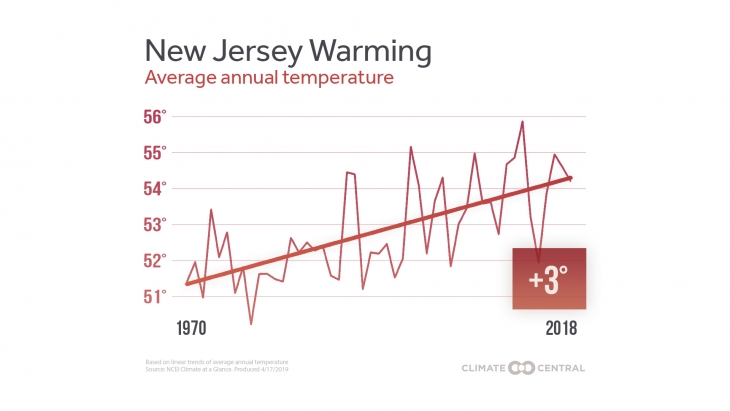 Explore the full report, American Warming: The Fastest-Warming Cities and States in the U.S.

Since 1970, New Jersey has experienced a 3°F increase in annual average temperatures, making it one of the fastest-warming states in the nation, Climate Central analysts found when examining temperature records. The last 20 years have seen 11 of the state’s 15 hottest summers, according to state climate records that date back to 1895. The state’s warming is largely the result of greenhouse gas-driven climate change and urban development.

While New Jersey’s escalating temperatures magnify the risks of damaging storms and flooding — both well-documented consequences of climate change — the hazards of declining air quality are less widely discussed.

This warming trend, combined with pollution from cars, power plants and chemical plants, is expected to increase the number of days each year that New Jersey residents inhale unsafe levels of ozone pollution, also called smog. 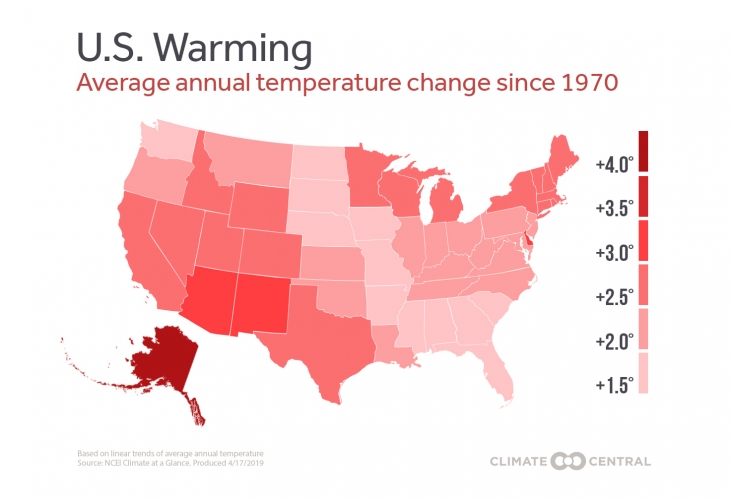 Explore the full report, American Warming: The Fastest-Warming Cities and States in the U.S.

“A Weight On My Chest”

Ozone is most commonly known as the layer of gas that wraps around the Earth in the stratosphere – tens of thousands of feet above the planet’s surface — and protects against skin cancer and other impacts from ultraviolet sunlight.

But ozone resting near the Earth’s surface is synonymous with smog. It forms when gases from tailpipe and smokestack pollution mixes in the air and combines in hot, sunny conditions. Ozone attacks the lungs—some people describe ozone pollution as “sunburn for the lungs.”

That’s why summer days — especially the extremely hot ones with heavy, still air — can be especially tough for people like Jenkins. 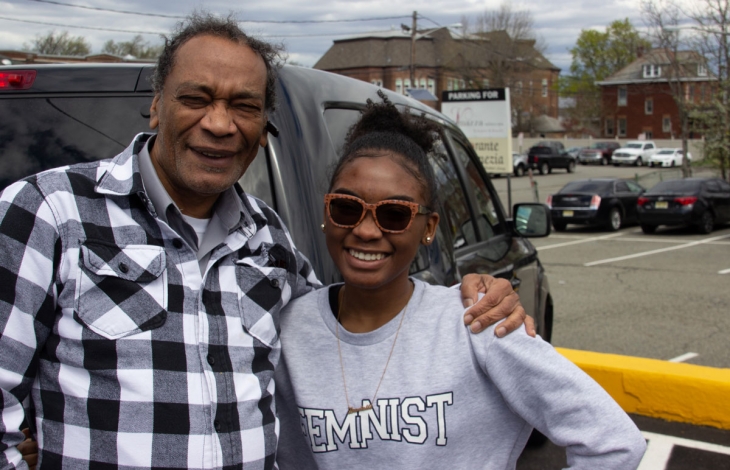 “If I don’t take my medication, I feel like a weight on my chest because of the heat,” Jenkins said.

New Jersey currently experiences about 22.5 days each year when outdoor air has too much ozone, according to Luis Lim, the chief of the New Jersey Department of Environmental Protection’s Bureau of Air, referring to annual averages from 2015-2018.

The problem was once much worse. Lim said the highest ozone levels peaked in the New Jersey in 1990, when they were nearly twice as high as last year’s.

The federal Clean Air Act, passed in 1970, successfully lowered the rampant amount of air pollution nationwide. Emissions of nitrogen dioxide, a key ingredient for ozone, have dropped in the U.S. by more than 40 percent, and ozone levels have dropped by 32 percent since 1980.

But now, climate change threatens to undo some of the progress made.

Hotter weather combined with population growth — driven by suburbs in the 1980s and ‘90s and by urban centers more recently — and steadily rising motor vehicle use on New Jersey’s roads boost the ingredients for smog formation.

Loretta Mickley, a senior research fellow at Harvard University, concluded in a 2016 Geophysical Research Letters study that unhealthy ozone days in parts of the U.S. would increase up to a week each year by 2050 — unless far-reaching measures are taken to reduce heat-trapping pollution from fossil fuels and other industrial activities.

Mickley’s model predicts that New Jersey will experience twice as many annual ozone days by 2050.

“If we keep the ozone precursors constant, and the climate warms, then we're going to run into trouble again, we're going to have the dirty air that we had 30 years ago, before the Clean Air Act.” Mickley said.  “We've made all this good work cleaning the air and now all that good work may be undone by climate change.”

“No Child Should Die of Asthma”

Dr. Evelyn Montalvo-Stanton, Jenkins’ doctor, is surrounded by the consequences in Essex County, where she works as a West Orange-based pediatric pulmonologist for RWJBarnabas Health.

The New Jersey Department of Health reports an average of about 100 deaths from asthma each year, with asthma-related emergency room visits highest in Essex, Camden, and Cumberland counties; while lowest in Morris, Somerset, and Hunterdon.

The state has seen a steep decline in number of asthma-related ER visits since 2009, but a sizable number of residents with respiratory issues are still struggling. NJDOH data shows that for every 100,000 residents, 7.3 ended up in the emergency room in 2017.

Yet those numbers only capture the worst cases of respiratory attacks; they don’t account for the episodes managed without hospitalization.

The people put most at-risk by ozone pollution are those with respiratory problems or heart disease, children and the elderly. Urban areas like Hudson County, where Jenkins goes to school, are heavily affected, but the rest of New Jersey faces a growing problem as well. The American Lung Association’s 2018 State of the Air report gave failing grades to 11 of the Garden State’s 21 counties.

In one sense, Jenkins is lucky. Her mother is a nurse, and she’s been seeing Dr. Montalvo-Stanton for years.

But not everyone has the understanding or the means to properly manage their breathing troubles. Asthma and respiratory problems are more dangerous for low-income people, according to, Dr. Afif El-Hasan, who works as a pediatrician and national spokesperson for the American Lung Association.

“Treating and trying to prevent asthma is costly, and if you can’t do that, then it becomes even more costly for the individual and for society in general,” said Dr. El-Hasan. “Ozone causes increased mortality rates for asthma, increased cardiovascular disease and increased premature babies.”

What Is Being Done

Air quality is regulated on the federal level, with a regional approach based largely on metropolitan areas. New Jersey is split into two regions — North Jersey is considered part of the New York City region, and South Jersey part of the Philadelphia region. 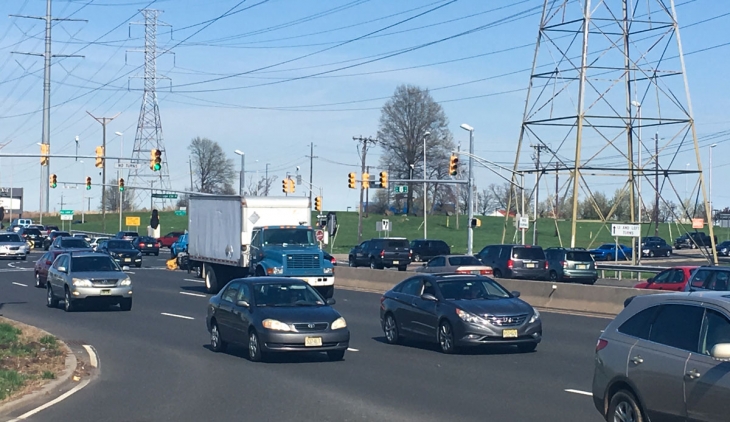 Traffic on Route 1 in Woodbridge on April 17, 2019. Tailpipe emissions are a leading source of air pollutants that combine on hot, sunny days to form ground-level ozone. The number of high ozone days could increase, and NJ's air quality could deteriorate, as climate change warms the Garden State.
Credit: Michael Sol Warren, NJ Advance Media for NJ.com

The EPA last adjusted ozone standards in 2015, and new standards may be set soon. The federal agency said its review of the National Ambient Air Quality Standards (NAAQS) for ozone is underway; “with a goal of finalizing any necessary revisions to the standard, including averaging time, by the end of 2020.”

But that assessment of potential changes to air quality regulations is being undertaken by an EPA that, under President Donald Trump, has taken steps to rollback environmental protections.

Last October, for example, the New York Times reported the EPA disbanded a panel that gave advice on what the federal air standards for particulate matter, or soot, should be.

“Not only are people who are already asthmatic having higher rates of asthma exacerbations and symptoms,” Roy said. “Long term, ozone averages have actually had an impact on mortality.”

At the state level, action is being taken by Governor Phil Murphy’s administration to try and cut back on ozone pollution in the Garden State.

The New Jersey Department of Environmental Protection is in the process of handing out grants to transportation projects across the state meant to get dirty engines out of service, and replace them with electric options where possible. The program is funded by $72.2 million awarded to the state as part of a massive settlement paid out by Volkswagen for the carmaker’s emissions cheating scandal.

New Jersey Attorney General Gurbir Grewal made headlines in January when he joined a multi-state lawsuit against the EPA, blaming the agency for inaction by failing to set stricter emission standards for states whose coal-burning power plants blow pollution across state lines.

And last summer, Grewal joined a different lawsuit against the EPA to keep “super-polluting” trucks called gliders off the road. A week after that lawsuit was filed, the EPA changed its course.

New Jersey and other governments worldwide have been taking modest steps to slow warming, but both American and global greenhouse gas emissions increased from 2017 to 2018. As New Jersey gets hotter, the simple act of breathing will remain a challenge for people like Jenkins.

“I guess being 17, it bothers me because it’s the world I’m going to have to live in and be an adult in,” Jenkins said.

Next year, Jenkins plans to start school at Spelman College in Atlanta. She’s excited, but she knows her asthma is unlikely to cooperate.

“It’ll just be more dirty air that I have to breathe in.”