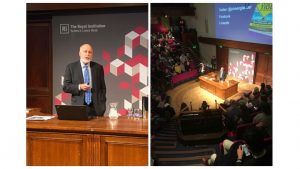 Monday night I had the very real privilege to give a lecture at the Royal Institution in London, the “RI.” Since 1799 this has been a legendary location to explain scientific principles to a wide audience. Famously this is where Michael Faraday demonstrated magnetism, induction, and the basis for electric motors. I did my demonstrations and spoke from Faraday’s Desk; quite a sense of history in that. It was very well attended and the audience was excellent with great questions and comments.

Particularly relevant to climate change, in 1859, Faraday’s successor, John Tyndall demonstrated at the “RI”, the power of carbon dioxide and the other “greenhouse gases” to trap heat, now well known to cause warming of the atmosphere. It was quite an experience for me to be explaining the effects of that warming on rising sea level in the very same room, 160 years later.

In doing some research for this presentation, I found that back in 1859 it was not the carbon dioxide in the air that had London’s attention. It was the terrible smell. This was the peak of “the great stink.” The Thames River literally served as the sewer for human waste, rotting food and animals.

The prevailing attitude among the leaders of the day – elected and business – had been that solving the sewer problem “was just too difficult and expensive” to solve.  Until it became intolerable and deadly.

The stench and deaths from the cholera epidemic finally caused Parliament to push past the concerns about cost and disruption. Sir Joseph Bazalgette led the engineering project that was eventually copied in every city worldwide.

In a similar pattern, during the 20th century, disastrous and deadly building fires got worse as the size and density of buildings increased.  In various major cities from London to New York and Chicago, numerous deaths caused leaders to act, creating new regulations requiring automatic sprinkler systems in most buildings, despite the “burdensome cost.” With sewer systems and sprinkler systems, no single property owner or financial interest could solve the problem without hurting their competitiveness. It took government regulation to establish a broader regime for the common good. 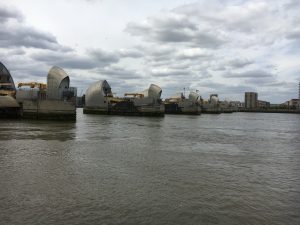 Coastal storms have always been destructive as well. One example was the North Sea Flood of February 1, 1953, which hit both Britain and the Netherlands. Giant waves from a rapid windstorm happened to hit at a peak spring tide (king tide), and coincided with a low-pressure system; as the saying goes, “a perfect storm.” The sea reached 5.6 meters (18 feet) above normal during the night. A major levee in the Netherlands was breached killing 1,836. In the U.K. 307 died and 28 in Belgium. That single event led to the design, funding, and construction of these engineering marvels, the Thames Barrier and the Rotterdam harbor gate, the Maeslantkering. 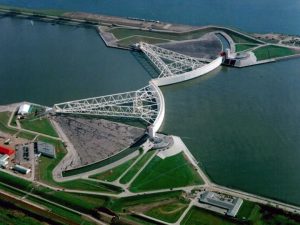 Today we are facing another looming catastrophe, but there is a big difference. With the sewage system, with fire sprinklers, and the storm barriers, the problem was effectively solved through engineering and regulation. Now with the warming climate, rising sea level and changing global weather patterns due to the melting Arctic sea ice, things will not “return to normal” any time soon.  There is no quick fix. In fact, even if we went 100% renewable energy “today” the heat already stored in the ocean will continue to melt the glaciers causing sea level to rise dramatically well into the next century. That is why if we are to avert disaster it is URGENT that we tackle these issues with a multi-pronged global approach:

The lesson of history says that we do not change our ways until AFTER the disaster pushes us to accept the disruption and the cost. As I made the case last night at the Royal Institute in London, it is urgent that all aspects of society understand this problem. With understanding, we can create the political will to stop the warming and start to invent and construct a world that can manage with sea level many feet (meters) above present. Most will say this is “impossible.” We have no choice. Not trying is immoral. it will be a great challenge, perhaps mankind’s greatest ever.

This week in London and up to Liverpool I will be making that case with the British engineering and maritime sectors. This is one of the major focuses of the nonprofit International Sea Level Institute, to inform the various professions with what they need to know to rise to this challenge, BEFORE catastrophe strikes.