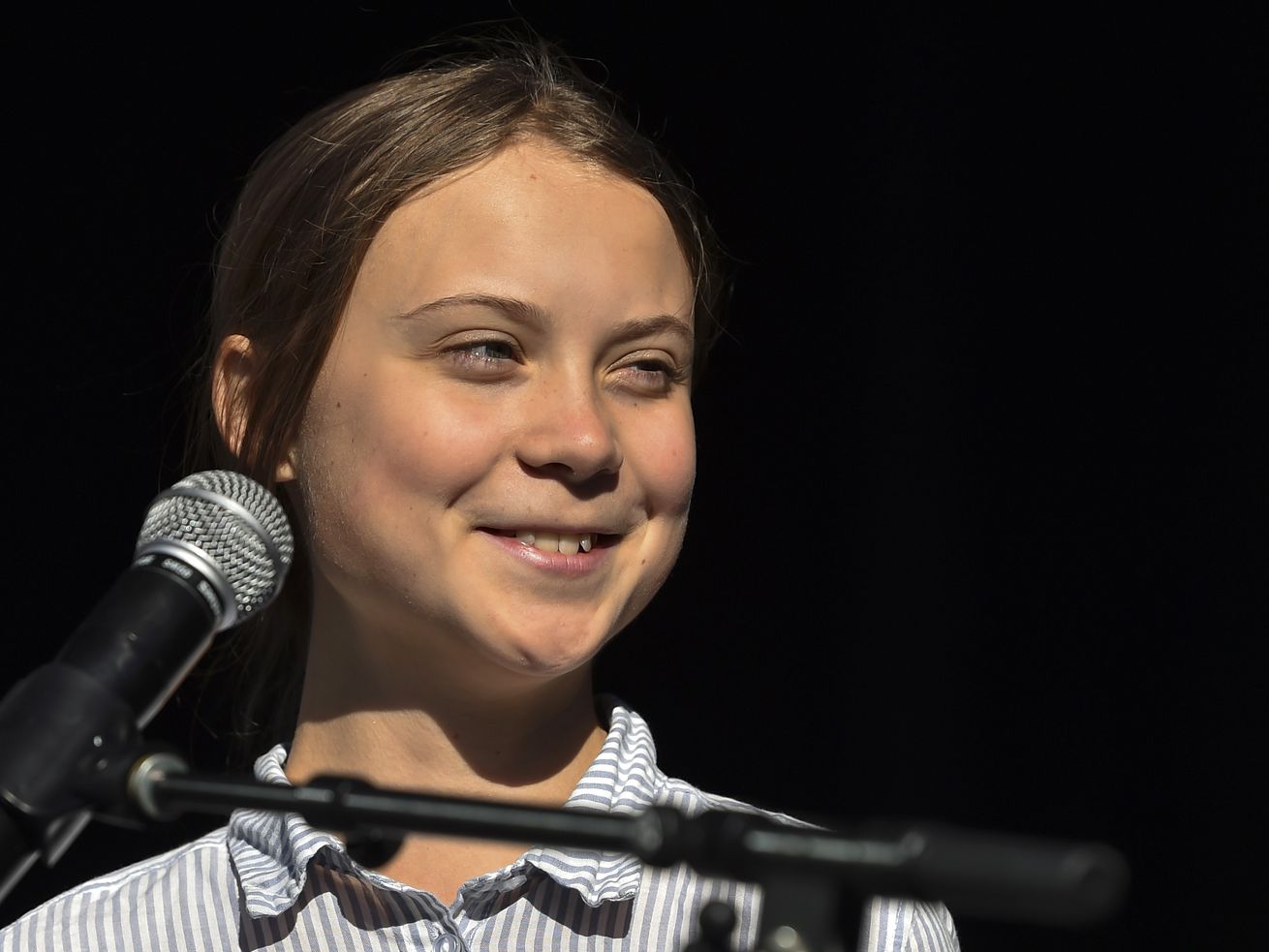 When Swedish climate activist Greta Thunberg addressed the elites assembled at the World Economic Forum in Davos, she concluded with a simple message: “I want you to act as if our house is on fire.”

For those elites, it was unfamiliar language. They are accustomed to talking about climate change, but typically such talk amounts to ritual invocations of “urgency” coupled with promises about what might be achieved in 2030 or 2050.

When your house is on fire, though, you don’t promise results in a decade or a year or a week. You grab a bucket and find some water. Immediately.

When it comes to climate policy, Thunberg has it right. We are in a unique historical moment; we understand the danger of climate change and, for now, still have the resources and political space necessary to address it. But every second of delay makes the challenge more expensive, more difficult, and more dangerous.

It’s not just climate activists saying that. The policy community is moving in that direction as well, with similar arguments coming into clearer view from economists and political scientists. The common theme is risk, and what it means to take the mounting risks of the climate crisis seriously.

Let’s start with economics. The conventional climate policy recommendation from economists has been to start with a low carbon price and ramp up slowly, but a recent paper in the Proceedings of the National Academies of Science (PNAS) flips that view on its head, urging instead an aggressively high price, starting now. The arguments are worth unpacking.

The conventional story from climate economics may get it backward

Mainstream climate economics has always had a simple story to tell, based on a simple fact about climate change: The damages get worse as time passes. The damages today are fairly low, which means the amount of money worth spending to avoid them is fairly low. As the damages rise, the amount worth spending to avoid them will rise. What’s more, we value losses today more than we value losses in years hence; we “discount” future benefits and losses.

Together, these yield the conventional policy recommendation from economists, for decades now: a relatively low carbon tax that rises steadily over time. That basic structure goes at least back to economist William Nordhaus and is echoed in virtually every carbon tax ever proposed, including the most recent, the bipartisan Market Choice Act introduced in the House in July. (It would start at $24 a ton and rise at 2 percent plus inflation.)

But there is a growing counter-narrative among economists who claim that the standard picture gets it backward. Climate economic models have been trying to price damages when they should be pricing risk.

It argues that a properly calibrated carbon tax would start high — over $100, possibly toward $150 — rise for a decade or so, and then begin declining. That’s virtually the opposite of conventional wisdom.

The key is thinking like a financial economist, the sort of person who bets on businesses and markets. Financial economists know a lot about decision making under conditions of uncertainty. They are not so arrogant as to believe they can make “optimal” investments. Optimality requires perfect knowledge, and knowledge of market trends and fluctuations is, to say the least, imperfect. So financial economists learn to think in terms of risk, how to value it and hedge against it.

However, as Daniel, Littleman, and Wagner (DLW) argue, “important insights from pricing financial assets do not typically inform standard climate-economy models.” Much of the modeling in climate economics seeks to determine the ideal carbon price based on a particular damage function — “a knob-twiddling exercise in optimizing outcomes,” as the great economist Martin Weitzman once put it. (Weitzman, who died recently, was a mentor of Wagner’s and is a huge influence on the counterinsurgency in climate economics.)

DLW approach CO2 as an asset with negative returns and build a model based on financial economics: “EZ-Climate, a simple recursive dynamic asset pricing model that allows for a calibration of the carbon dioxide (CO2) price path based on probabilistic assumptions around climate damages.” DLW are not the first to use this kind of model — here’s a review of recent research — but their model is simpler, more modular, and easier to adapt.

First, while the model produces a range of outcomes — like all such models, it is sensitive to various choices of inputs and parameters, and there’s no “correct” carbon price — in all cases, the carbon tax starts high and declines. How high? It ranges, but in almost no case was it less than $100 a ton.

Why so high? The cost of risk overwhelms everything else, and risk is extremely high right now.

One of the key factors in risk is uncertainty. We know that somewhere out there, at some temperature, there are tipping points at which biophysical processes that drive warming will become self-sustaining. (The ice melts, the blue water absorbs more heat than the white ice did, more ice melts.) They will enter rapid phase shifts that drive warming beyond any human ability to rein it in. In short order, geologically speaking, the Earth’s climate will become inhospitable to large mammals like us.

What level of warming might trigger those tipping points? We have only the faintest idea.

There are “tail risks” like this all around climate change. We think they are unlikely, but we don’t really know how unlikely, and the stakes could quite literally be existential.

The price declines over time for two reasons. First, uncertainty resolves itself; people will know more in 2050 than we do today. Alongside that, technology improves and costs fall, making mitigation easier.

The second clear result from the modeling is that the cost of addressing climate change rises rapidly every year of delay:

When we do not spend the money to hedge against risk, risk mounts, at enormous financial cost.

One important implication of this model: It serves to justify early climate policies around the world that economists often derided as expensive, like Germany’s solar feed-in tariffs or Norway’s electric-car subsidies. Those policies translate to extremely high prices on carbon.

But from the perspective of prudential risk management, the problem has not been those “expensive” policies. The problem has been that there aren’t a lot more of them.

It also gives econs reasons to argue how, say, German solar feed-in tariffs are much too costly.

Meanwhile, in EZ-Climate, we can’t get our price below ~$100 in our base case, no matter how hard we try.

The economic argument is bolstered by a political argument with a similar structure.

In the case of climate change, we know the old saw applies: An ounce of prevention is worth a pound of cure. Preventing climate change through mitigation is much cheaper than adapting to a changed climate. Every bit we prevent is a bit we don’t have to adapt to. And mitigation spending is more egalitarian, more just — everyone on Earth benefits from it — whereas adaptation spending is inevitably local and skewed to those with more wealth and resources.

Along with this “economic disruption pathway” is a “political disruption pathway.” Howard and Livermore review the literature on the connection between climate change and civil conflict, along with the connection between civil conflict and participation in international treaties, and raise the danger that “climate change-induced conflict may make countries increasingly unable or unwilling to take the steps necessary to prevent even worse outcomes in the future.”

Climate change will primarily manifest as a series of traumas, and as a general matter, stress and trauma cause people to draw their circles of concern inward. Yet addressing climate change requires a circle of concern that encompasses all of humanity. It requires international cooperation. And the escalating damages of climate change are likely to make the very cooperation necessary to fight it more difficult. Local concerns and fears will come to dominate.

Sociopolitical feedbacks are as difficult to predict as biophysical feedbacks — we are just as ignorant about how close they may lie — but they are just as dangerous. Prudence suggests acting aggressively while coordinated action is still possible.

“Humankind is wasting a short window of opportunity to address climate change,” Howard and Livermore warn, “one that may soon shut as climate damages incapacitate effective political action.”

The best way to hedge against these gathering risks is to act immediately and aggressively to transition away from fossil fuels to sustainable energy, transportation, agriculture, and industry, spending whatever is necessary along the way.

Every year the countries of the world put off that transition, they pile more risk onto the shoulders of their children and grandchildren. How dare they.

Looking for a quick way to keep up with the never-ending news cycle? Host Sean Rameswaram will guide you through the most important stories at the end of each day.

Subscribe on Apple Podcasts, Spotify, Overcast, or wherever you listen to podcasts.