“Global Warming Could Stop Quickly” – NOT ! (Part One)

This week there is no doubt about a suitable subject.  This article from January 3rd has stirred up a lot of optimism… and confusion. It has raised hopes that the effects of global warming (aka climate change) could stop soon. I’ve had dozens of requests to explain it for obvious reasons.

INSIDE CLIMATE NEWS is an excellent journal. This article is easy to read and I will give you the link in a moment.  But first I can give you the problem quite simply. They are reporting on an analysis by Joeri Rogelj, Ph.D., a recognized climate expert from Imperial College (London) and quote him as saying:

“It is our best understanding that, if we bring down CO2 to net zero, the warming will level off. The climate will stabilize within a decade or two,” he said. “There will be very little to no additional warming. Our best estimate is zero.”

Sounds great. Let’s do it ! We’ll start tomorrow….  Just to review the problem:

So, back to the headline and the quote from Dr. Roegelj. He is saying that within a “few decades” of getting carbon dioxide emissions down to zero, that there will be no additional warming.

The problem is that there is no plan to achieve zero emissions. Even the famous 2015 Paris Climate Agreement only set a goal to stop the additional warming at two degrees Celsius, another degree warmer than we are presently at. Nearly all experts think that achieving that goal will be daunting. And as the headline and quote implies there is a lag time of decades for the warming to stop, even after the greenhouse gas emissions are brought to zero.

Even if we can find a way to do that, at the warmer temperature, there will be much more of the planetary effects, such as described in the last bullet item just above.

The simple fact is that no major nation has yet figured out how to reach the goal of zero emissions, or even to reduce emissions by any considerable amount. In the first two decades of this century, we have put more greenhouse gases in the atmosphere than in any time in recorded history. The below graph shows cumulative emissions by country/region. 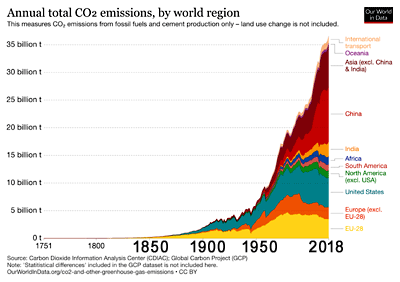 Electric cars, solar panels, and wind turbines are terrific, but they do not get us anywhere near zero emissions. Indeed, emissions will likely increase when the Covid-19 restrictions are removed.

This INSIDE CLIMATE NEWS article, headline, and quote create a very unrealistic expectation, suggesting that we can relax, that the solution is in sight.

In fact, nothing could be further from the truth.

Stay tuned for Part 2…when I will explain this graph in more detail and share some positive steps on curbing greenhouse gases.

The Real Mission of that New Sea-Level Satellite
November 23, 2020

Can a President Stop Flooding by Executive Order?
November 9, 2020

The Lesson from Dauphin Island about Rising Seas
December 2, 2018