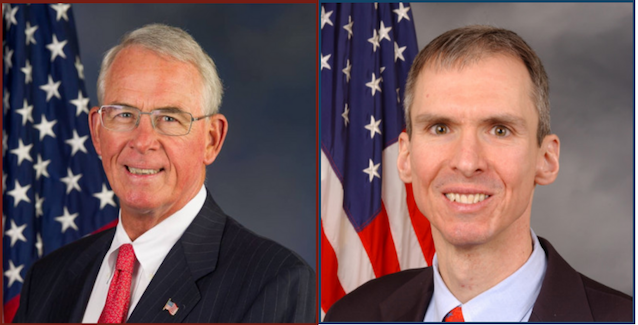 Our push for carbon pricing just took some new, exciting steps forward. First, Florida Republican Rep. Francis Rooney has introduced the bipartisan Stemming Warming and Augmenting Pay (SWAP) Act with cosponsor Rep. Dan Lipinski (D-IL). Together, these two representatives have also introduced the Raise Wages, Cut Carbon Act. Citizens’ Climate Lobby is pleased to see the introduction of these bipartisan bills that would achieve significant reductions in CO2 emissions. The bills indicate that Republicans and Democrats are beginning to agree that a price on carbon is the most efficient way to reduce America’s emissions quickly, a position long held by economists.

We want to thank Rep. Rooney and Rep. Lipinski for introducing these bipartisan climate bills today. Both Rep. Rooney and Lipinski have been leaders in the effort to enact a robust price on CO2 emissions as original cosponsors of the Energy Innovation and Carbon Dividend Act (H.R. 763), as has Rep. Ted Deutch (D-FL). Rep. Deutch, the lead sponsor of the Energy Innovation Act, has been a passionate and effective voice on this issue in the halls of Congress and in the media.

These carbon pricing bills also bring important new ideas into the policy discussion. The SWAP Act would use the revenue to reduce payroll taxes, help low-income households with energy costs, and fund low-carbon energy R&D. The Raise Wages, Cut Carbon Act would use revenue in similar ways. These ideas will feed a richer national discussion on the best way to price carbon. Like the Energy Innovation Act, which returns 100% of revenue to U.S. households, these bills would drive down America’s emissions.

Another development today is that Sen. Chris Coons (D-DE) has introduced the Climate Action Rebate Act of 2019 in the Senate, with Rep. Jimmy Panetta (D-CA) introducing a companion bill in the House. This is a Democratic bill containing many great ideas for a national carbon pricing program. This bill will add to and enhance the ongoing national dialogue on a carbon price. Senator Coons remains committed to reintroducing the Energy Innovation Act as a bipartisan bill this Congress. CCL will continue to work with him and all members of Congress to advance a bipartisan bill.

We are excited to see Republicans and Democrats focusing their attention on the effective tool of carbon pricing, both through these bills and on the Energy Innovation Act. The climate is neither Democratic nor Republican, nor is it waiting around for us to resolve our political differences. The essential question should not be who supports a particular policy proposal, but rather how effective will that proposal be at reducing emissions. We need to build more bridges between the two parties, and have more bipartisan dialogue, if we are to take meaningful action. Major bills like these accomplish those goals.

CCL will host an online call for volunteers on Tuesday, July 30, at 8 p.m. ET / 5 p.m. PT to learn more about these new bills. Volunteers can also visit CCL Community to ask questions.

Danny Richter is CCL’s Vice President of Government Affairs and is based in Washington, D.C.