Time to act on climate. Here’s How. Do it Now. 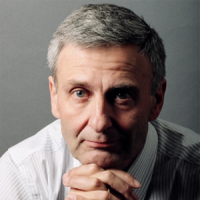 According to a recent public opinion survey on climate change, 70% of Americans now believe that a 5 °F (2.8 °C) global temperature rise in 75 years would be “bad”. While this is an improvement compared to 1997 when only 61% agreed, it is probably still true that most Americans do not understand their impact on climate change. It is also probably true that most decision makers do not fully understand the enormous scale of the problem and the urgency of deploying solutions.

To get a sense of the scale of the problem we have created, it is useful to understand how much solar energy is being trapped as a result of human activities. Scientists measure this in watts (or “joules per second”) and tell us that we are warming the earth by about 250 trillion joules every second by adding ever increasing amounts of greenhouse gases into the planet’s atmosphere.

Because most people don’t keep track of “joules”, world renowned climate scientist James Hansen uses the analogy of the Hiroshima atomic bomb to help us grasp the scale of our actions. According to Hansen, the rate of increase in global warming is “… equivalent to exploding 400,000 Hiroshima atomic bombs per day, 365 days per year. That’s how much extra energy Earth is gaining each day.”

Now that we understand the magnitude of the problem, we need to get a sense of how much time we have to reduce carbon dioxide and other greenhouse gas emissions to avoid catastrophic and irreversible effects of climate change.

Scientific consensus is that we need to keep our global temperature increase below 2 °C (3.6 °F), and ideally at no more than 1.5 °C (2.7 °F). Given these temperature “guardrails”, along with data on the quantity of emissions per degree of warming, we have the tools to calculate the remaining amount of emissions before we reach the temperature thresholds. This is in effect our remaining carbon budget, which we have left to emit before we get to zero emissions worldwide.

If we are aiming at the upper limit of 2 °C, we face a steep but still doable path of descending to zero by mid-century, as shown here:

As we can see, it would have been much easier to make a ‘safe landing’ if we had started to deploy climate solutions at scale in the 1980s or, at least by the year 2000 when we could have made our descent with a 2% annual decrease. Now, we must reduce emissions by at least 6% per year. If we do only enough to stabilize our emissions for the next ten years, we would then face a 10% per year reduction in emissions.

If we aim for a maximum of 1.5 °C, we must reach zero emissions by 2050 and the descent becomes even steeper. If we don’t start bending the curve downward right now but only manage to make it level, we would use up our entire carbon budget in eight years. That would mean we would have to make a vertical descent in 2028, which is, of course, impossible to achieve. It is abundantly clear that the result of our global climate procrastination for decades now leaves us only a small and quickly narrowing window of opportunity to save our climate.

While China recently surpassed the U.S. as the world’s largest emitter of greenhouse gases, it is important to remember that the U.S., when we look at total emissions over time, is still leading the pack.

This bar graph shows cumulative carbon emissions for the top nine countries with the largest emissions during the period between 1751 and 2019 (also included for comparison is the EU-28 block). Given that the U.S. has historically contributed the largest amount of carbon emissions, we have a responsibility to contribute commensurately to deploying solutions.

The good news is that with ample solutions and available resources to address the climate crisis, adopting the needed policies and technologies before the tight window of opportunity closes, is still possible.

If prior technology adoption history is any guide, clean energy technologies like wind turbines, solar electric arrays, and battery energy storage, could be fully adopted within a decade or two.

Since almost three quarters of global greenhouse gas emissions come from the energy sector, and since there is a vast array of technologies available today to generate energy without emitting greenhouse gases, it makes sense to focus on a rapid transition to renewable energy sources. 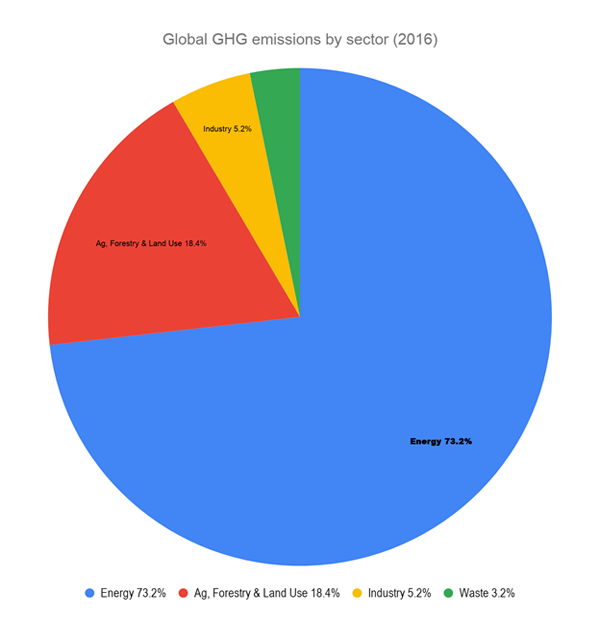 Most of our renewable energy technologies, including wind turbines, solar electric panels, and hydropower, generate electricity. While this makes switching to renewable energy sources possible for the electricity sector, heating, and transportation, among others, still need to decarbonize.

U.S. GHG emissions by sector show that electricity, heat, transport, and buildings account for the bulk of our emissions (73% in 2016). Since we can easily turn electricity into heat, we can switch from heating our homes and other buildings from oil or gas to energy efficient electric heat pumps. 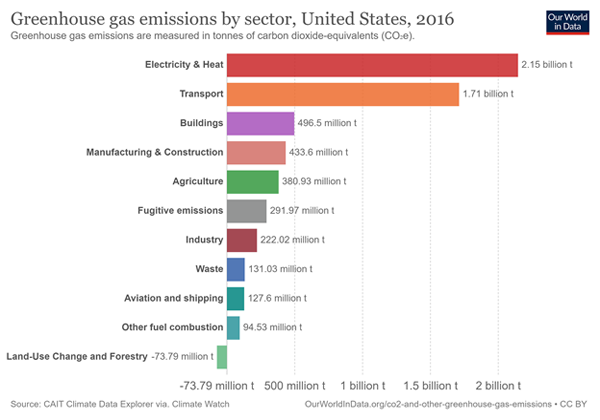 Few people are familiar with heat pumps. However, refrigerators, freezers, and air conditioners are all run by heat pumps. For example, a heat pump moves the heat from the inside of a refrigerator or freezer to the outside of it, thereby keeping our food cold. Air conditioners work in the same way. Modern heat pumps can both heat and cool our homes efficiently with electricity.

Heat pumps for space heating are available as air source heat pumps (similar to room or central air conditioning units), or as geothermal ground source heat pumps. Water heaters and pool heaters are also now available as heat pump models. And a heat pump clothes dryer in the laundry room can replace a gas powered or electric model and save 20% to 60% energy compared to conventional dryers.

Pairing electric motors with compact battery storage allows us to switch our gas- and diesel-powered cars and trucks to run on electricity as well.

Transitioning our transportation system to electricity also improves energy efficiency. A conventional car engine converts most of the fuel it burns into heat instead of mechanical energy (that is why our cars and trucks need radiators to disperse the wasted energy). Electric vehicles (EVs) are 60% to 73% efficient in converting grid electricity into powering the wheels, compared to 12% to 30% for conventional gasoline powered vehicles. And when accounting for EVs’ ability to recapture energy from regenerative braking they can reach efficiencies between 77% and 100%.

Merely using electricity in our buildings and vehicles would not solve the climate crisis if we were to continue to burn fossil fuels to generate electricity. The electrification of the heating and transport sectors must happen in tandem with retooling our entire electric systems to carbon-free energy sources.

That includes replacing fossil fuel power plants and upgrading the electric transmission and distribution grid to allow a diverse portfolio of decentralized and dispersed renewable energy facilities to smooth out output from variable resources like sun and wind. Energy storage and demand response programs will also play an important role in managing the fluctuations of both demand and supply of electricity.

So, what will this mean for your home? Your all-electric fossil-fuel free home of the future will likely have several or all the following features: a super-insulated and airtight building envelope, passive solar heating through south-facing glass surfaces and enough thermal storage to retain solar thermal energy overnight during heating season, rooftop solar electric and water heating panels, heat pump water and space heating and cooling, and all electric appliances. You will have an electric induction cooktop in the kitchen, a battery energy storage system, an EV charging station for your car (if you still need one), and a smart load center to manage all energy supply and demand. Electric vehicles will also have the ability to provide power to the home or the grid when not needed for mobility.

Electrifying everything also solves another problem. As we convert raw energy into usable energy, we waste most of it through inefficient energy conversion. If we follow the path of energy flow from an electric outlet back to its source, we see that we waste two thirds of the primary energy input (typically natural gas or coal) as we convert it to electricity in a power plant. 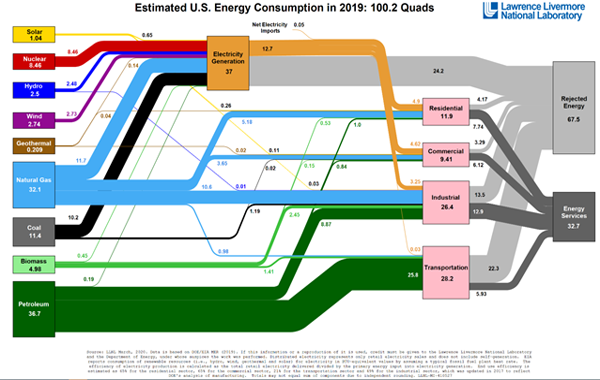 The conversion losses are even worse in the transportation sector where we end up using only 21% and having wasted 71% of the primary energy input.

In addition, there is significant energy use in prospecting, mining, processing, refining, and transporting of primary energy stocks which is not reflected in this chart.

We can dramatically reduce the amount of wasted energy by replacing fossil fuels with renewables for the generation of electricity, and by electrifying the transportation and heating sectors. Saul Griffith of Rewiring America calculates that we can eliminate an estimated 60% of total energy use this way.

If we understand the three fundamental facts – the scale of the climate crisis, the short window of opportunity we have left to address it, and our large contribution to the problem – it becomes clear that we must act to immediately scale up and speed up efforts to transition our entire economy to be powered by renewable energy so that greenhouse gas emissions decline by at least 6% per year. Doing so will give us a chance to stay within the guardrail of a 2 °C global temperature increase and a livable climate for future generations.

Gordian Raacke is the founder and executive director of Renewable Energy Long Island, a not-for-profit organization working to accelerate the transition to 100% renewable energy. Gordian lives in an energy-efficient and solar powered home in East Hampton, NY.