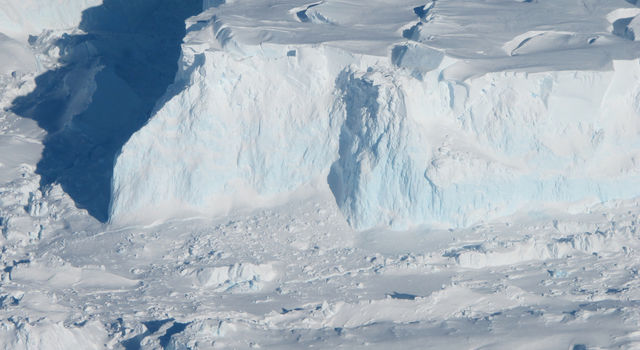 There are two primary causes of global mean sea level rise – added water from melting ice sheets and glaciers, and the expansion of sea water as it warms. The melting of Antarctica’s ice sheet is currently responsible for 20 to 25 percent of global sea level rise.

But how much of a role will it play hundreds of years in the future?

Scientists rely on precise numerical models to answer questions like this one. As the models used in predicting long-term sea level rise improve, so too do the projections derived from them. Scientists at NASA’s Jet Propulsion Laboratory in Pasadena, California, have discovered a way to make current models more accurate. In doing so, they have also gotten one step closer to understanding what Antarctica’s ice sheet – and the sea level rise that occurs as it melts – will look like centuries from now.

“Unlike most current models, we included solid Earth processes – such as the elastic rebound of the bedrock under the ice, and the impact of changes in sea level very close to the ice sheet,” said JPL’s Eric Larour, first author of the study. “We also examined these models at a much higher resolution than is typically used – we zoomed in on areas of bedrock that were about 1 kilometer instead of the usual 20 kilometers.”

“We found that around the year 2250, some of these solid Earth processes started to offset the melting of the ice sheet and the consequent sea level rise,” Larour said. In other words, they actually slowed the melting down.

The team noted that a hundred years even further into the future – by 2350 – this slowdown means that the melting of the ice sheet is likely to contribute 29 percent less to global sea level rise than previous models indicated.

“One of the main things we learned was that as grounded ice retreats inland, the bedrock under it lifts up elastically,” said Erik Ivins, a co-author of the study. “It’s similar to how a sofa cushion decompresses when you remove your weight from it. This process slows down the retreat of the ice sheet and ultimately the amount of melting.”

Although this sounds like good news, the scientists say it’s important to keep it in perspective. “It’s like a truck traveling downhill that encounters speed bumps in the road,” said Larour. “The truck will slow down a bit but will ultimately continue down the hill” – just as the ice sheet will continue to melt and sea level will continue to rise.

The breakthrough of this study, he added, was to “reach resolutions high enough to capture as many of these ‘speed bumps’ as possible and determine their effects in Antarctica while also modeling sea level rise over the entire planet.”

The study, titled “Slowdown in Antarctic Mass Loss from Solid Earth and Sea-Level Feedback,” was published today in Science.

More information on the study can be found at:

Extreme heat triggers mass die-offs and stress for wildlife in the West
July 23, 2021

Mytheli Sreenivas: Worried about a population bust? History shows we shouldn’t be.
July 20, 2021

MIT predicted in 1972 that society will collapse this century. New research shows we’re on schedule.
July 20, 2021

What it’s Like at Columbia Climate School in the Green Mountains
July 19, 2021

How climate change fueled the devastating 2021 floods in Germany and northwest Europe
July 16, 2021
How the Euro-Flood Happened
July 16, 2021

As the Greenland Ice Sheet Retreats, Mercury is Being Released From the Bedrock Below
July 15, 2021

Renewables Are Key to a Just Energy Future for Puerto Rico
July 15, 2021

Task Force Presents Advice to U.S. on Climate and Global Migration
July 14, 2021
If you’re not a climate reporter yet, you will be: Covid-19 coverage offers lessons for reporting on the climate crisis
July 14, 2021

Biden wanted a climate alliance with Europe. He’s getting a fight
July 14, 2021

Black lung, a scourge of the past, still plagues Illinois mines
July 14, 2021