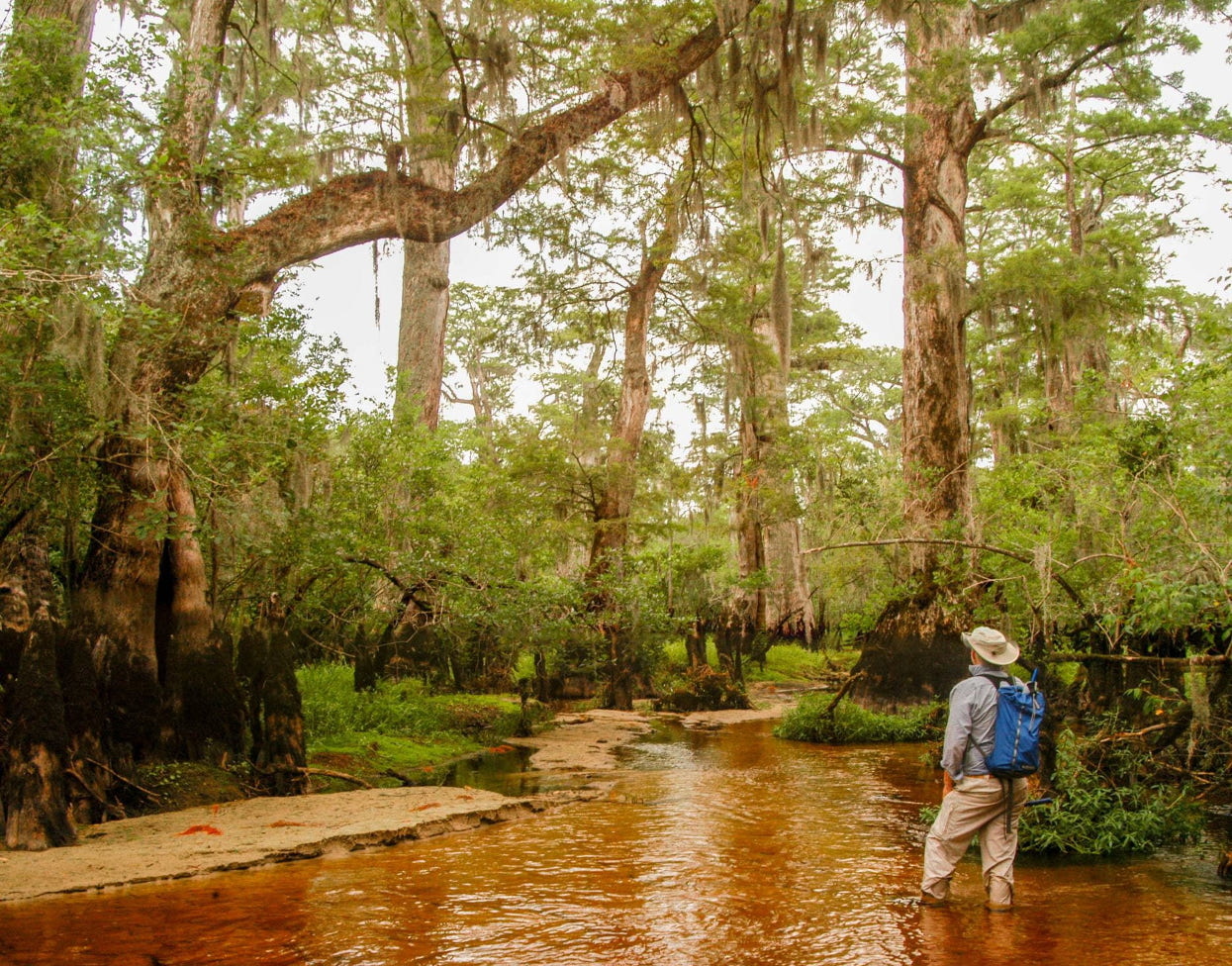 Trees that tower over a protected forest along the Black River in southeastern North Carolina have held environmental secrets for more than 2,000 years, but their knowledge and existence is now threatened by climate change-driven sea level rise.

Ancient bald cypress trees, some as old as 2,624 years, recently discovered in Black River, North Carolina, provide one of the longest and most accurate records of local climate in North America. They are the oldest trees yet found in an ancient forest on land protected by The Nature Conservancy. The conservancy protects some of these trees, but there are others outside of its protection that scientists and conservationists are worried about.

These ancient trees have taught us a lot: from clues to the mysterious disappearance of the Lost Colony at Roanoke to the complex patterns of climate. Hundreds of years later these same trees—which sprouted before Alexander the Great set out to conquer the world— are now threatened by sea level rise and logging. And scientists say their disappearance would hamstring our ability to discover climate patterns and predict future conditions of a changing climate.

Bald cypresses provide a record of wet and dry years by growing wider rings in wetter years. By taking a core sample of the tree’s rings, scientists get an easy-to-read record of moisture levels traceable to a specific year. This record in these trees’ rings and others across the continent have helped reveal regional climate patterns and lead scientists to new climate discoveries, such as the global patterns that determine weather in North America.

Now, the United Nations Intergovernmental Panel on Climate Change predicts rising sea levels that could kill the Black River’s bald cypress if carbon emissions are not cut. The uptick in emissions from the United States and policies favoring fossil fuels threaten the trees existence.

More immediately, many of these ancient trees, some of which were more than 100 years old when Julius Caesar was born, remain unprotected and subject to logging. The recently discovered trees are protected by The Nature Conservancy and other private conservation groups, but many others just like them are unprotected and logged.

“The researchers that are involved with those bald cypress say, ‘Well, this is a drought that happened in 1502, they mean 1502 AD with no plus or minus associated with that,” said Scott St. George, a professor of geography at the University of Minnesota who studies historic climate.

The trees are “famous in my field,” he told EHN.

Clues to past and future climate

In 1998, a team led by David Stahle, who runs the Tree-Ring Laboratory at the University of Arkansas, found reasons for the failure of the first English colony in America: colonists arrived during the worst drought in 800 years. Later, the colonists who started Jamestown—more than half of whom died—arrived in the first year of the driest seven-year period in close to 800 years. While a lot went wrong for those colonists, the team argued the drought compounded their problems.

The unique research—in which Stahle and colleagues examined bald cypress trees near Jamestown and the Lost Colony—was widely recognized. “That was the height of our fame, of course,” Stahle told EHN.

But, the climate information recorded in tree rings has also helped climate scientists puzzle out and confirm modern climate patterns, like the connection between El Niño events in the Pacific Ocean and how wet parts of the southern United States, northern Mexico and northeastern Brazil will be in a given year.

All that’s needed is a small core drilled out of the tree perpendicular to the rings. That core contains each ring along the dowel-sized cross section and doesn’t harm the tree. Then, the researchers compare the record of wet and dry years to climate phenomena, like predictable high- and low-pressure systems thousands of miles away, and identify the connections.

Trees help show this pattern is reliable— then farmers and municipalities can use the information to prepare for the coming year.

The bald cypress trees’ record of moisture could be important as humans face down the effects of climate change. Over the last 500 years, the eastern United States have been getting wetter.

“So say the tree rings,” Stahle said. It’s a trend that will be compounded by climate change, which is predicted to increase rainfall in the eastern United States, according to the Fourth National Climate Assessment.

Findings like this help scientists understand how the effects of human-caused climate change may be exacerbated by natural changes.

The bald cypresses of North Carolina are not alone: Old fir, hemlock and cedar trees in British Columbia have helped scientists understand the effects of El Niño events on that area. Douglas fir trees in New Mexico identified severe historical droughts and connected them to historic epidemics and political turmoil. Tree ring records from coast redwood trees in California shows the forest burned more frequently before settlement by whites in the 1880s. Today Redwood National and State Parks protect the trees and their record. Ongoing ecosystem restoration aims to ensure they thrive for years to come.

“It could happen in their lifetimes” 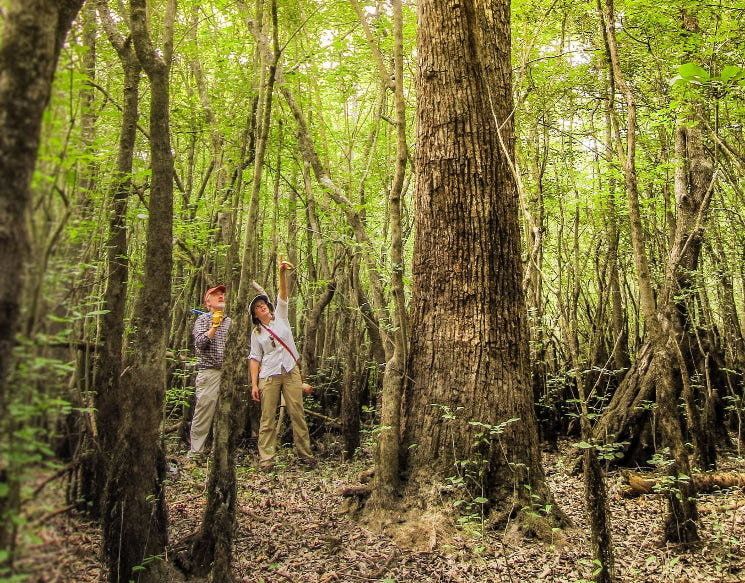 The bald cypress at Black River sit two meters above sea level, a level the Intergovernmental Panel on Climate Change says could be reached in the distant future without greenhouse gas emissions reductions. Sea levels rose about .2 meters in the 1900s. They could rise another .6 meters by 2100 and are expected to rise for centuries after that.

“That would be a tremendous amount of sea level rise, of course, and that’s not going to happen in our lifetimes. But these are 2,000-year-old trees, so it could happen in their lifetimes,” Stahle said.

“I can’t imagine that humanity is going to allow this.”

Red spruce, which is used to reforest old mining sites in West Virginia, might be making a comeback just in time for climate change to shift their native range out of the Appalachians.

A nearer threat for the ancient bald cypress trees is logging, Stahle said. Though The Nature Conservancy protects the some of trees at Black River, he believes other, still-unprotected ancient trees are cut down for wood pellets and garden mulch—he pointed to Swamp Loggers, a reality show for several years on Discovery, as proof.

Other ancient bald cypress up and down the Black River are owned by timber companies and other nearby swamps have been extensively logged, Angie Carl, Fire and Restoration Program Manager for The Nature Conservancy in the area, told EHN.

While there is no active, widespread logging along the Black River, the threat is always there, she said.

Others think the bald cypress’s age and location and North Carolina’s timber market offer them some natural protection from logging.

While no one can stop an owner from logging their land, no matter how old the trees, water quality protections for swamps and wetlands make logging more difficult, Robert Bardon, a professor of forestry at North Carolina State University, told EHN.

Harvesting timber is generally a low priority for private landowners, especially when the trees are too big for timber mills, like the ancient bald cypress would be, said Bardon.

An effort to create a state park on the Black River in 2018 died in the North Carolina legislature after vociferous local opposition.

The North Carolina state parks, though, have been used to protect extraordinary natural resources before, said Katie Hall, a public information officer for the North Carolina Division of Parks and Recreation. Lumber River State Park protects bald cypress trees—though not as old as the ones at Black River.

Guarding these trees and their forests is important, not just for scientific purposes, Stahle said.

“Their most important value is not scientific. It’s of course aesthetic and environmental,” Stahle said. “If we hope to save the diversity of planet Earth, we have to save these remnant natural areas. And these old growth forest remnant areas are, I think, chief among the areas that need to be protected.”