Agriculture plays a unique role in climate change – while it is a driver of emissions, it also has the potential to be a solution to global warming, by drawing down and storing carbon in the soil. There are a range of viable options to lower emissions from this sector through better land management, better livestock management, and reducing food waste.

Agriculture is a significant source of greenhouse gas emissions in the U.S. and globally. It contributes 8.4% of U.S. emissions, which is lower than agriculture’s share in some other countries, in part because of relatively high U.S. energy sector emissions.  On the global level, agriculture, forestry and land use contribute approximately a quarter of total greenhouse gas emissions.  Deforestation also plays a much larger role on the global level, while forestry and land use are a net carbon sink in the U.S.

Soil carbon storage directly benefits farmers by improving soil fertility, reducing erosion and increasing resilience to droughts and floods. That’s why many farmers already use conservation practices that keep soil healthy and full of carbon, such as no-till agriculture, agroforestry, and planting cover crops. Some U.S. federal programs may support soil carbon sequestration, including the Environmental Quality Incentives Program and the Conservation Stewardship Program, which provide financial and technical assistance to farmers and ranchers who want to improve their land stewardship.

However, significant economic and policy barriers prevent more widespread adoption of conservation practices, such as high up-front cost for implementation and the longer time frame for farmers and ranchers to experience the benefits. These initiatives are all voluntary and have yet to be adopted at scale.

Minimizing soil disturbances lowers the rate of organic matter decomposition, in turn reducing the amount of carbon lost back into the atmosphere. No-till, or “conservation” tillage, is a popular way to increase soil stability because it is relatively quick and affordable to implement. However, longer-term support and incentives for robust, continued stewardship are needed to maximize these benefits, since soil carbon can be easily lost once the land is plowed again. Agroforestry, in which crop cultivation is intermixed with growing trees and sometimes livestock grazing, may have the highest potential to hold carbon, ranging from 1.7 to 2.5 MT CO2e per acre annually, because of long-term storage in increased root growth and soil stability. This process, however, involves converting cropland to woody systems, which may not be feasible in certain climates and can be costly for farmers.

Applying animal manure to fields not only provides nutrient-rich fertilizer, it also promotes larger and more diverse soil microbe communities that break down organic matter and store it as soil carbon.

Applying nitrogen-based fertilizers in the right amounts and at the right time can limit nitrous oxide emissions, as indiscriminately blanketing fields with fertilizers leads to significant run-off. These practices can also save farmers money, by reducing the amount of manure or chemicals inputs needed to achieve the same crop yields.

Having a continuous cover of vegetation, instead of letting fields lie bare after harvest, reduces the loss of carbon, nutrients, and topsoil from erosion. Cover cropping is a common method where a “cover” of crops is planted and not intended for harvest. However, while cover crop planting in the U.S. increased 50% from 2012 to 2017, it still represents a very small portion of farmland – only 15.4 million of an overall 642 million acres of harvested cropland.

Better management of livestock can also provide solutions to emissions in the agricultural sector. Methods to reduce livestock emissions include:

Cattle, sheep, and goats are ruminants and have a stomach structure that is adapted to breakdown cellulose-rich plants, such as grass. In the process, these animals produce and belch methane, contributing to agriculture’s greenhouse gas emissions. UC Davis found that adding seaweed to dairy cattle feed makes it easier to digest, lowering the amount of methane emitted. Other companies are developing compounds that can be added to cattle feed to reduce the herd’s amount of burped methane by 30%.

Certain methods of livestock management, such as adaptive multi-paddock grazing, has been found to sequester large amounts of carbon under the specific soil and climate conditions in the midwestern U.S. However, carbon gains from grass-fed operations may come with the trade-off of increased methane or nitrous oxide emissions. The climate benefit of grazing depends on how livestock are managed and on the local climate and soil and vegetation types, offering a net climate benefit only under very specific circumstances.

Waste at larger-scale livestock operations can be converted through anaerobic digesters into biogas energy and by-products that can be applied to soils as nutrient sources. Biogas can be used for on-farm energy or sold to local utilities. In California, where half the state’s agriculture emissions come from livestock,  producers also can get assistance to implement alternate systems for managing manure, with methods such as composting, dry scraping, or improved pasture management.

In the U.S., most food waste happens “close to the fork” than to the field. In other words, while many developing countries experience food loss from crops post-harvest, due to inadequate faulty cooling, storage facilities, or other infrastructure, food in the U.S. is more often wasted by consumers. Policies to standardize “sell by” labels can make it easier for households to know food is still safe to eat. There are also efforts underway from restaurants, hotels, and other cities and businesses to reduce food waste or ensure that products nearing their expiration date reach food-insecure communities.

The EPA works with municipalities across the US in a voluntary program to capture methane from decomposing organic material in landfills. Rather than contributing to climate change, landfill gas can be captured, treated, and used as a source of energy. 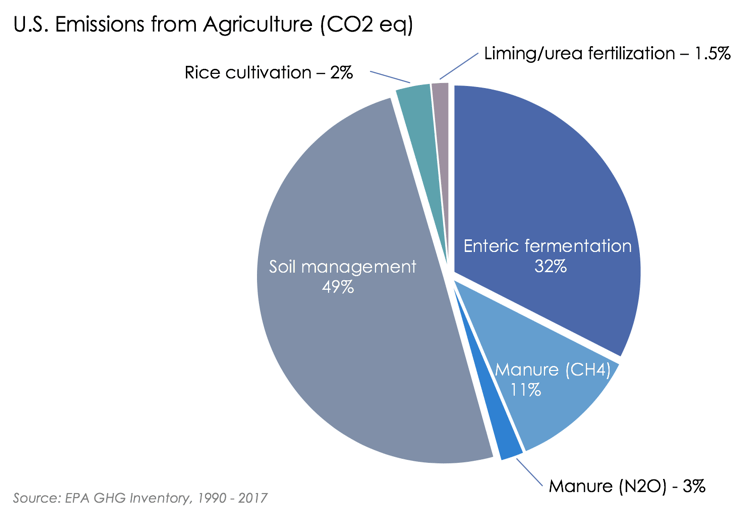