2019 in Review: another busy year for the Skeptical Science team

As we wrap up 2019 and prepare for 2020, here is our annual review of what our team was up to during the year. As in previous recaps, this one is divided into several sections:

Several members of the SkS-team were lead- or co-authors of peer-reviewed papers published during 2019. Here is a list of some of them:

Comment on “The Impact of Recent Forcing and Ocean Heat Uptake Data on Estimates of Climate Sensitivity”
Kevin Cowtan and Peter Jacobs
Journal of Climate, 33(1), 391-396.

Our 2013 study Quantifying the consensus on anthropogenic global warming in the scientific literature hit one million downloads on July 17! This makes it the #1 most downloaded paper at the journal Environmental Research Letters. In fact, it’s the most downloaded paper in the 80+ journals published by the Institute of Physics. One million+ downloads are usually reserved for viral videos involving piano-playing cats. Not a bad effort for a peer-reviewed scientific paper!

The University of York’s chemistry department and Kevin Cowtan will play an important role in the GloSAT project which commenced in October 2019. The project plans to accurately estimate global climate change since the start of the industrial era, using data collated since the days of the Clipper ships over 200 years ago. One source of early marine air temperature observations is the fleet of the English East India Company between 1789–1834 along trade routes from Europe to India and Southeast Asia. There are also observations from land stations before 1850 that have not yet been used in global datasets. GloSat will be led by the National Oceanography Centre (NOC) in collaboration with the Universities of York, Reading, East Anglia, Edinburgh and Southampton, as well as scientists from the Meteorological Office’s Hadley Centre.

John Mason published the book “The making of Ynyslas“, which he described in his blog post in October. Ynyslas is a well-known National Nature Reserve on the coast of Mid-Wales. The book is all about the deglaciation foillowing the last ice-age and the accompanying substantial global rise in sea levels. In one sense, it’s an answer to the popular denialist argument, “the climate’s always changed”, since it shows in graphic detail what that can entail. In another, it’s a novel and experimental way of communicating climate change, using a science-based narrative hard-wired to a real and well-loved place. 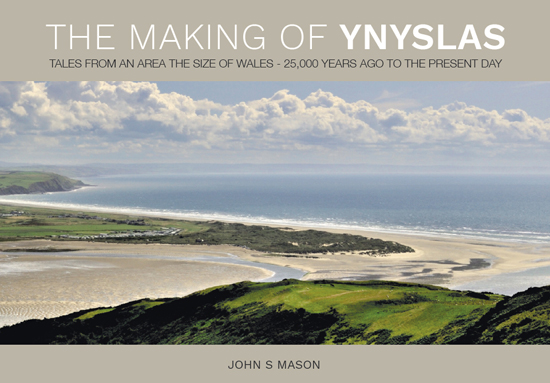 As in previous years, members from our team again published articles in various other outlets:

Bärbel Winkler leveraged some of John Cook’s “Cranky Uncle” fallacy cartoons in a quiz to identfiy logical fallacies at the Scientists for Future booth during the global climate strike on September 20. Dana Nuccitelli did an AMA on Reddit about climate science on November 5. John Cook discussed Climate Change and Cranky Uncles with Sofia Baca and Gabriel Hersch in episode #45 of the Breaking Math podcast published on December 10.

Some presentations were recorded during the year: 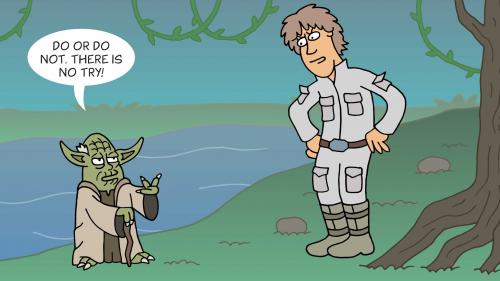 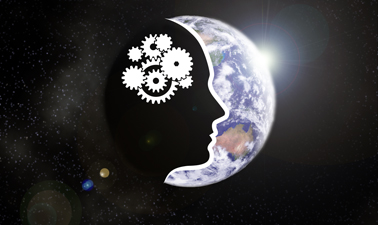 Denial101x was available throughout the year as one paced and one long-running self-paced version, with the latter attracting over 3.500 participants. At the moment, we are inbetween runs in order to “regroup” and to add some new videos before the next self-paced run starts on February 4, 2020. It will then be available throughout the year until mid-December. Registration is already open on edX. 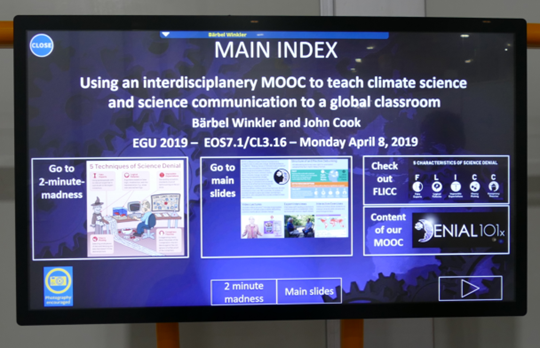 In April, Bärbel Winkler travelled again to Austria’s capital Vienna to participate in the week-long European Geoscience Union’s General Assembly. On Monday she did a presentation about Denial101x in Session EOS7.1 – Climate Change Education which was done in the interesting PICO-format which is a mixture of extremely short presentations, aptly named “2-minute-madness”, and self-service presentations made available on large touchscreens.

In September Bärbel took part at the K3 conference about Climate, Communication and Society in Karlsruhe, Germany and offered a well attended workshop about misinformation on the 2nd day of the conference. Our German partnersite Klimafakten has a write-up about the workshop.

Zeke Hausfather presented a poster about Rethinking the definitions of modes of decadal climate variability during this year’s AGU meeting in San Francisco.

At the beginning of the year we took the Pro-Truth-Pledge as an organisation – even if this may seem somewhat akin to “stating the obvious” as the rating of “factual reporting: very high” for Skeptical Science on Media Bias/FactCheck makes pretty clear! As we have been fighting misinformation about human-caused climate change since the website was launched in 2007, it seemed like a logical step to take.

Several of our blog series kept getting published throughout the year with John Hartz leading the way with his weekly summaries and digests. Ari Jokimäki published his New Research posts on a weekly basis until mid-May and Doug Bostrom took over shortly afterwards. Dana Nuccitelli reposted his articles published in other outlets (see list above) and wrote several original articles for SkS. Several of Zeke Hausfather’s CarbonBrief articles were reposted. Evan and jg added five analogies to their successful collaboration. Other members providing serveral articles were Riduna and Bärbel Winkler.

According to our website statistics and the unique visitors counted per month, 2019 was a very good year for Skeptical Science as we had several months above 500,000 unique visitors during the second half of the year! The following chart shows this particular statistic for years we have data for, 2015 to 2019:

Note: Data for May 2019 and January 2018 was missing in the stats so we tried to extrapolate it from the other months we had data for.  Click for larger version or view with stacked years.

As mentioned in an earlier blog post, one month stuck out during 2019 when the view numbers were considerably higher than usual. We are fairly certain that this was caused by the “global week of climate action” kicking off on September 20 with a huge global climate strike followed by Greta Thunberg’s “How dare you?” speech to world leaders on Sept. 23. The spike is clearly visible in the daily views across all rebuttals since January 1, 2019 (click for larger version): 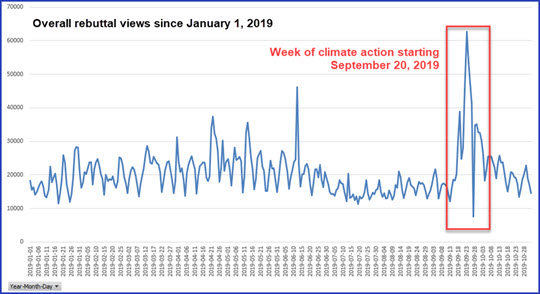 Not really wanting to overdo the charts in this review post, but one particular spike in rebuttal views is too distinct to not get a special mention, especially as we couldn’t trace it back to its source. Anybody have an idea, why the basic version of “consensus” got viewed 6,000 times on December 7 (click for larger view)?

Other notable downloads include the Guide to the Representative Concentration Pathways (RCPs) (7,000+) and the Fact-Myth-Fallacy summary (5,500+) with its German version getting downloaded more than 1,200 times in December alone (and the other months together not quite reaching 900).

A new team in Israel added or updated 44 rebuttals, making the list of Hebrew translations considerably longer. Our Brazilian team updated or created 18 Portuguese rebuttals, and translators in Russia worked on 10 rebuttals.

Our Facebook page currently has about 188,000 followers. It provides breaking news and timely information about climate-related matters from around the world. Its format allows readers to comment on and discuss each post, albeit in a more abbreviated form than the comment threads on the SkS website. John Hartz creates the bulk of the FB posts and other members of the SkS team respond to questions submitted by readers on a regular basis.

We’ve also set up shop on MeWe, a relatively new social media platform which promises to stay ad- and tracking free. You can find the Skeptical Science MeWe page via this link but need to register an account before you can join the 310+ followers we have “accumulated” there since starting the page on January 1.

At the time this review is published, the crowdfunding campaign which started on December 4 for the free Cranky Uncle app has hit it’s half-way point and thanks to the donations received thus far, at the very least the iPhone/iPad version will become a reality. 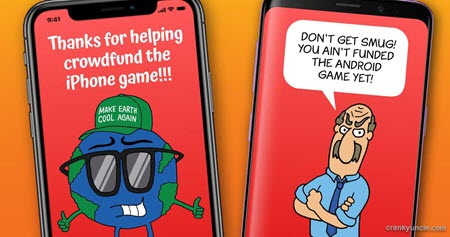 As we head into 2020 we’d really appreciate your help in order to reach additional stretch goals by February 4. We’d like to make the app as impactful as possible in order to inoculate large parts of the population against the misinformation still making the rounds about human-caused climate change. Wouldn’t it be neat to get herd immunity against fake news? If your answer to this question is “Yes”, please consider supporting the Cranky Uncle Crowdfunding Campaign!

Another exciting development heading into 2020 is the publication of the upcoming book Cranky Uncle vs. Climate Change by John Cook, to be released on Feb 25, 2020. This is a 176-page book featuring hundreds of cartoons explaining and exposing climate misinformation. If you want a preview of the book, John has been posting a steady supply of cartoons in response to current climate misinformation on his Instagram page…

Thanks for reading and all the best for whatever 2020 has in store for us!